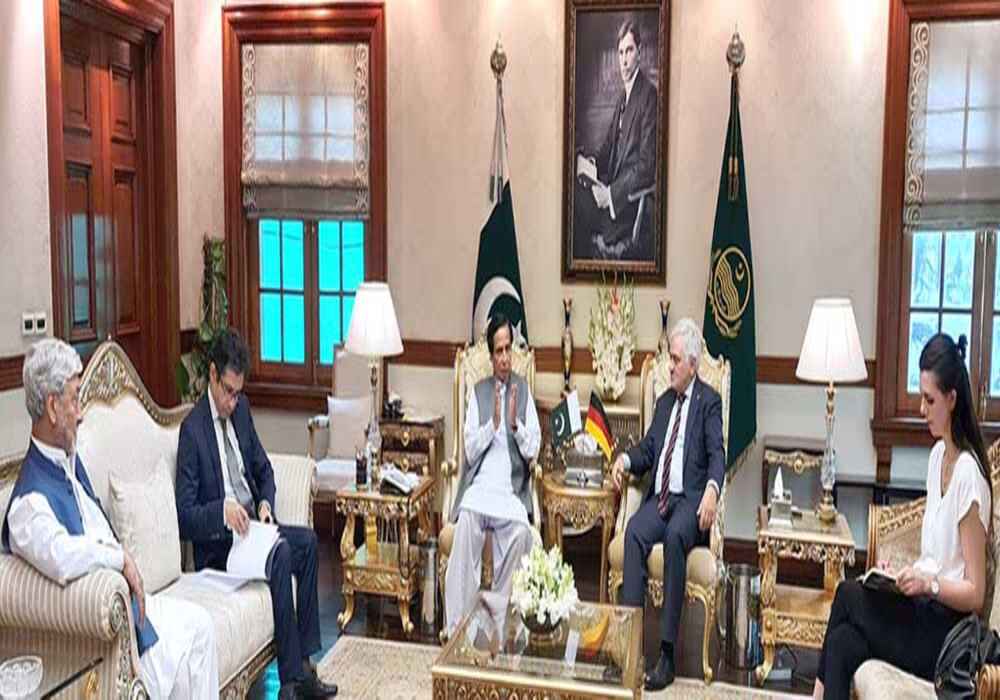 German Ambassador Alfred Grannas has expressed regret over the loss of lives and property due to rains and floods and expressed the desire to promote cooperation with the Punjab government in various fields.

“We are desirous of accelerated steps to expand the bilateral cooperation,” he said. Ambassador Grannas called on Chief Minister Punjab Chaudhry Parvez Elahi at the Chief Minister’s Office on Tuesday. First Secretary of the German Embassy Dorota Magdalena Berezicki, Chief Secretary Abdullah Sumbal, former Principal Secretary to CM GM Sikandar and others were also present on the occasion.

Issues of mutual interest, bilateral relations and increasing cooperation in various fields were discussed. It was agreed to increase cooperation in the fields of education, health and water storage. Germany expressed its willingness to provide technical assistance to the Punjab government regarding water storage. The CM informed about the flood disaster and the rehabilitation activities and added that Pakistan has been severely affected by climate change effects. It is not possible to describe the destruction caused by floods in different parts of Pakistan, including southern Punjab districts. This is a daunting challenge that all nations should immediately address by adopting a common plan of action, he emphasised.

The CM noted that a special package has been formulated to rehabilitate the flood victims and asserted that the international community needs to fully support Pakistan in this hour of trial. “I had started the program of channelizing the water of hill torrents of Koh-e-Sulaiman in 2002 in my previous tenure; unfortunately, the succeeding government stopped this beneficial program. Now, we are again channelizing the water and building small dams,” said Parvez Elahi.

Dams are necessary for Pakistan to prevent precious water from getting lost in the sea, he said and noted that a proper network of dams would have saved Pakistan from such devastations besides storing rainwater for the future needs. “We would be saved from this havoc if more dams are constructed,” he maintained. The CM said Germany is our best partner and Pakistan would like to benefit from its expertise in vocational and technical education, health and water storage. Punjab would take the lead in promoting cooperation with Germany in various fields and technical support for water storage from Germany will be welcomed, CM further said.

Also, the fourth governing body meeting of LDA was held under the chair of Chief Minister Elahi at his office. The CM ordered the establishment of hydrants for timely response to fire incidents in the city and said that in case of fire, water supply will be ensured from hydrants established at different places. He directed that no map should be passed without a safety audit of big buildings by Rescue 1122. He also ordered the inclusion of other cities in the development process including Sheikhupura in LDA limits.

In the meeting, more than 1,200 applicants’ allotments were approved after the clearance of their records in widow and NADRA besides reviewing a proposal to set up a separate marketing department in LDA. It was decided in principle to collect WASA’s sewerage charges from non-paying housing schemes and it was approved to adjust the LDA allowance to the running pay scale. In compliance with the high court’s order, the constitution of a sub-committee was approved to decide the allotment of the alternative plot to an applicant and it was further decided to set the limit of at least one kanal of land for building apartment buildings.

Separately, a delegation of overseas Pakistanis led by Aamir Khan met Chief Minister Parvez Elahi at his office. Khan presented a cheque of Rs15 million to the CM in the Chief Minister’s Flood Relief Fund. While appreciating the steps taken by CM Parvez Elahi for flood relief, said that Parvez Elahi set an example by reaching the flood-affected area first.