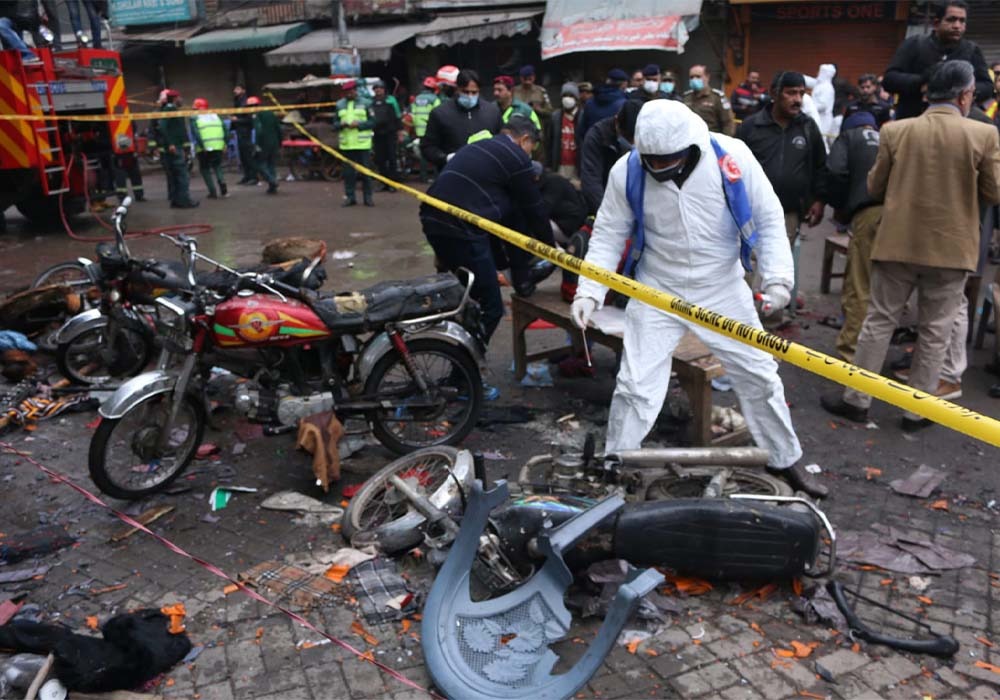 A blast ripped through Anarkali Bazaar on Thursday afternoon, leaving at least three dead and 25 others injured.

The blast occurred at 1.44pm and the explosion shattered windows of surrounding shops and buildings and damaged motorcycles as well.

According to the latest updates in the Anarkali Bazaar blast investigations, law enforcement agencies have identified the suspect through camera footage, which showed that the alleged terrorist arrived on a motorcycle and placed a bag on the scene.

The disposal squad also revealed that the explosive used in Thursday’s blast was similar to the one used in the 2013 Anarkali blast.

Talking to Minute Mirror, Lahore Commissioner Capt. (retd) Muhammad Usman said that the blast in Anarkali Bazaar was to be condemned, adding that no terrorist threat was received by the administration.

Usman said that the condition of five persons injured in the blast was critical. There are also women who were undergoing treatment and all possible medical aid was being provided to the injured in the hospital.

Moreover, in light of the blast, Lahore Deputy Inspector General (DIG) Operations Dr Muhammad Abid Khan has ordered an increase in security on entrances and exits of the city. He said that all the divisional superintendents of police (SPs) should check the security arrangements themselves and all station house officers (SHOs) should also be in the field.

Officers should take all possible measures for full security of markets, bazaars and sensitive places across the city and all police officers should be alert while I would personally monitor the situation, said Khan.

Earlier on Thursday, a Lahore police spokesperson had stated that the bomb was “placed” in a motorcycle.

Khan had told Minute Mirror that the investigation was still in its early stages. He further added the explosion created a 1.5-foot-deep crater in the ground.

Mayo Hospital’s medical superintendent reported that the facility received three dead bodies and 25 injured persons. The superintendent said that among the 25 injured, four people in serious condition were sent to the operation theatre.

Ramzan, a 38-year-old Ferozewala resident, and Zeeshan, a 9-year-old youngster and Absar, a resident of Karachi, were identified as the deceased. Meanwhile Absar’s parents were also injured, according to hospital officials.

The area was cordoned off and police were collecting evidence from the crime scene.

Meanwhile, Punjab Chief Minister (CM) Usman Buzdar took notice of the incident and directed the Punjab inspector general (IG) to file a report on the matter. He also ordered officials to offer the best possible medical care to the injured.

The CM also received a preliminary investigation report, which stated that the blast occurred by a planted device that used 1.5 kilograms of explosive material.

In another statement, CM Buzdar condemned the explosion and promised that those guilty would be apprehended and justice would be served.

Prime Minister Imran Khan has also condemned the bombing in New Anarkali. While taking notice of the explosion, the PM urged the relevant authorities to arrest the culprits. He also expressed his sympathies to the grieving families of those killed in the explosion.

Pakistan Muslim League-Nawaz (PML-N) President Shehbaz Sharif said the blast at the historical marketplace was “upsetting” because it killed and maimed poor people and children.

He added that a terrorist attack in Lahore, coming on the heels of one in Islamabad, was not a good sign for the country.

In response to the tragedy, PML-N Vice-President Maryam Nawaz said that a blast occurring in such a crowded area was alarming. “May Allah have mercy on the families and Pakistan,” she tweeted.

Rehman expressed his sadness after hearing of the incident in Anarkali Bazaar. The Anarkali blast had revealed the provincial government’s and administration’s incompetence, he said.

He said that the Punjab government should take quick action to improve the treatment of the injured people, adding that the Anarkali blast occurring after the martyrdom of police officers in Islamabad, was concerning.

Meanwhile, the insurgent group BNA (Baloch Nationalist Army) claimed responsibility for the explosion through a spokesman. The official added in a tweet that the explosion was directed at workers of Bank Al-Habib Limited.