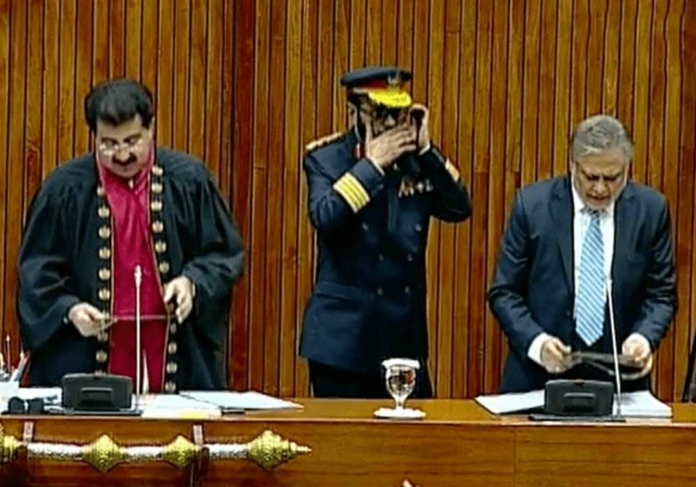 Pakistan Muslim League-Nawaz (PML-N) leader and former finance minister Ishaq Dar was sworn in as a senator during a ceremony at the upper house of parliament on Tuesday.

On Tuesday, Senate Chairman Sadiq Sanjarani took oath while PTI members protested and tore up copies of the meeting’s agenda and surrounded the dais.

Dar had been elected to the Senate from Punjab, however since October 2017, he had been out of the country and spent the previous five years in self-imposed exile in the UK.

Dar was still receiving congratulations from members of the coalition parties when the Senate chairman issued a directive to all senators to uphold the upper house’s decorum.

Ishaq Dar will take the oath of office as the federal finance minister tomorrow (September 28) at 10:00am.

President Arif Alvi will administer the oath during a ceremony at Aiwan-e-Sadr.

Miftah Ismail resigned from his position as finance minister in accordance with the party’s decision and paved the way for Ishaq Dar to take the charge.

Nawaz Sharif, PM Shehbaz, and other PML-N leaders attended a meeting in London where the decision was finalized.

A PML-N spokesperson said that during the meeting, Miftah tendered Nawaz his resignation and thanked him for giving him the opportunity to manage the ministry.