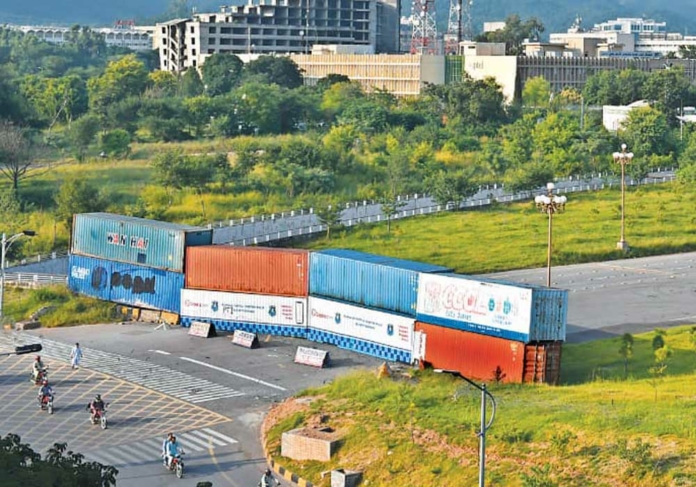 As the Pakistan Tehreek-e-Insaf (PTI) gears up for final showdown of its much-hyped long march, the Islamabad Capital Territory (ICT) Police on Sunday said that entry to the capital from Rawalpindi can be closed down on November 26, the day when the former ruling party’s supporters will converge on Rawalpindi to demand the early elections.

Islamabad IG Dr Akbar Nasir Khan presided over an important meeting regarding public order following PTI Chairman Imran Khan’s announcement that everyone will get a “surprise” on November 26.

During the meeting, risks were assessed regarding the expected PTI rally in the area adjacent to the federal capital and the entire security situation was also reviewed.

“Any type of illegal activity will not be tolerated in Islamabad,” the ICT Police wrote in a series of tweets.

It also said that entry to the capital from Rawalpindi can be closed down on November 26 which may cause problems for the people. “Any political activity in Islamabad will be done according to the law and with the permission of the city’s administration,” it said.

The Capital Police said that police, FC and Rangers personnel will be deployed to ensure the security of the Red Zone and security will also be boosted.

“Keeping in view the threats of terrorism, search operations will be conducted throughout the district,” it said, adding that strict action will be taken on any kind of “obstruction”.

Islamabad IG said that all possible measures will be taken to ensure the safety of the lives and property of the citizens of Islamabad.

Addressing in Rawat on Saturday, some 200 metres away from the federal capital, the PTI chief announced via video link that he was temporarily ending the march and its next phase would continue from Rawalpindi on the 26th of the current month.

“Our campaign hasn’t ended. We will gather on November 26 and demand transparent elections,” he added.

According to media reports, all private schools, petrol pumps, vegetable and fruit and other major markets in Rawalpindi will remain shut while a number of private schools in the capital are also expected to remain closed in wake of the PTI’s long march.

Officials of the Rawalpindi district administration said that the metro bus service between the twin cities will also remain shut. The district administration said that petrol pumps will be closed as a precautionary measure. The All-Pakistan Private Schools and Colleges Association (APPSCA) also announced to close educational institutions as soon as the long march enters Rawalpindi. APPSCA President Irfan Muzaffar Kiyani said that the lives of children could not be put in risk. “We have decided to close all schools in the Rawalpindi division from Monday,” he said. According to the District Education Authority Rawalpindi Office, the deputy commissioner will decide on the closure of government schools by Sunday evening or Monday. While the only vegetable and fruit market in the twin cities will also remain closed for four to five days due to the closure of entrance roads. Mobile phone and internet services will be suspended with the arrival of the long march in Rawalpindi.