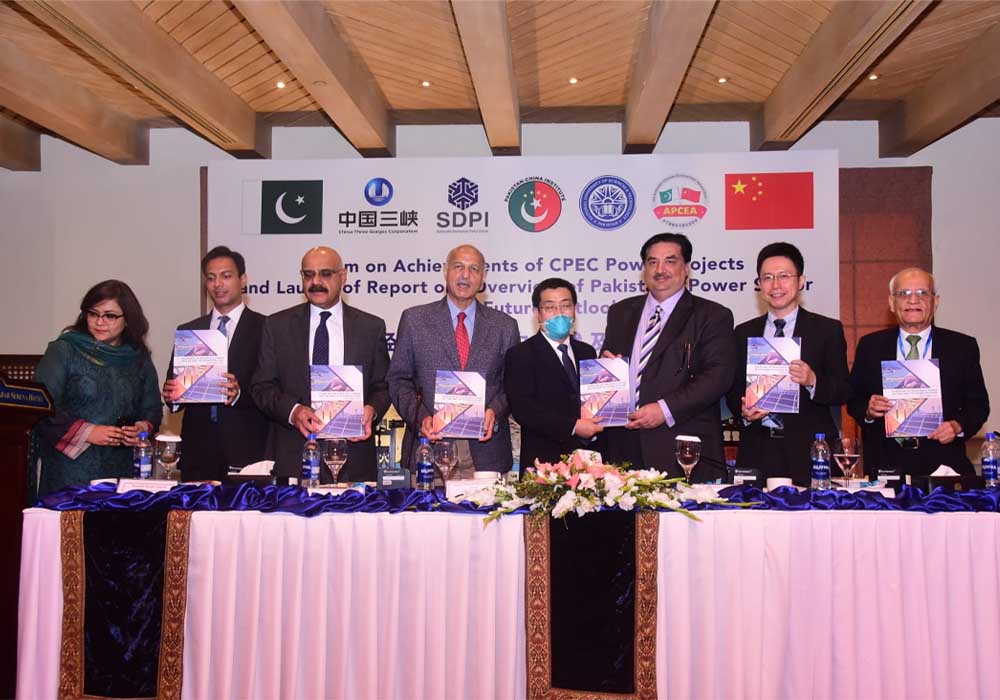 More than 150 people attended the event, including the Federal Minister for Energy Khurram Dastgir Khan, Shahjehan Mirza, Chairman of PPIB, Director of the Political & Information Office of the Chinese Embassy in Islamabad, Wang Shengjie, Senator Mushahid Hussain Syed, Chairman Senate Defense Committee & PCI, I and other senior executives of Chinese enterprises in Pakistan.

CSAIL actively implements the Belt and Road Initiative and participates deeply in the construction of CPEC Projects and has 3 CPEC projects including the Karot Hydropower Project.

With more than 30 years of experience in the development and utilization of clean energy projects, such as hydropower, wind power and solar energy, China Three Gorges Corporation (CTG) has accumulated valuable practical experience in the Pakistan’s electricity market, conducted in-depth studies and research on Pakistan’s Power Sector and accumulated.

Participating Pakistani experts and scholars said that in the past, there were serious shortages in the electricity supply in Pakistan, so CPEC was launched and it has helped alleviate this problem of power shortage.

While attending the launch ceremony of the report, Federal Minister for Energy (Power Division), Mr. Khurram Dastgir Khan said that since the launch of the CPEC, related projects were progressing smoothly.

In terms of energy, China has launched a series of power projects under the CPEC to help Pakistan meet its residential and industrial electricity demand. Pakistan’s energy shortages have been greatly alleviated. Electricity has always been one of the constraints on Pakistan’s development, and China has been able to enhance Pakistan’s energy supply capacity not only through the efficient use of various energy resources, but also by helping Pakistan to build various types of power projects.

He said the report is beneficial to deepen the understanding of Pakistani people on the current situation and future development of Pakistan’s power sector, as well as the contribution of the CPEC to Pakistan’s Power Sector. People in relevant fields in Pakistan should learn from Chinese personnel and deepen industrial cooperation between the two countries through the construction of projects like the CPEC Projects. China is an important partner of Pakistan in the energy sector, and China’s development experience is worth learning for Pakistan.

Mr. Zhang Jun, Chief Representative of CSAIL, said in his speech that Three Gorges Group was committed to provide affordable and clean energy for Pakistan, while investing in Pakistan’s power sector, and the Karot Hydropower Project, with a total installed capacity of 720 MW, is a flagship project of the Three Gorges Group in Pakistan.

He said that during the past 7 years of construction of Karot Project, we have seen engineers, managers and workers from China and Pakistan working together to overcome very serious events, such as the COVID-19 pandemic, however, they still achieved the Commercial Operation Date (COD) 54 days ahead of schedule.

Karot Project has provided 1.3 billion of clean and cheap electricity to Pakistan’s power grid, since it started generating power this summer. The power station has been operating very smoothly, providing effective power security for Pakistan through this hot summer season and playing its role in Pakistan’s flood control. As a Chinese engineer, who has witnessed the whole process of investment in this project, he was immensely proud of what the professionals of China and Pakistan have achieved through their joint efforts.

In his speech, Mr. Wang Shengjie, Director of the Political Information Office of the Chinese Embassy in Pakistan, said that the Power Sector of Pakistan is the most invested section of the CPEC and is a successful example of early harvest, making a special and irreplaceable contribution to solving the power shortages and serving the economic and social development of Pakistan, especially in such difficult times as the fight against the COVID-19 pandemic and floods is ongoing.

Senator Mushahid Hussain Syed, termed the report a ‘Policy Primer of Pakistan’s Power Sector’ since it aptly describes the on-ground situation of Power Projects in Pakistan and provides detailed analysis regarding opportunities and challenges in the Power Sector.

The report, he said, needs to be widely circulated so that it can contribute to public-private partnerships in the power sector. Moreover, he termed Pakistan’s relationship with China deep rooted and multifaceted.

The relationship between Pakistan and China, he believed, cannot be seen through the lens of CPEC since this relationship extends beyond it i.e., people-to-people connectivity, economic partnership, and support to each other on their core interests. He also underlined the need for Energy Security as the basis of economic and political independence of Pakistan, more so imbibing the lessons from the Ukraine War. PCI Executive Director, Mustafa Haider Syed, conducted the proceedings and said that Pakistan-China Institute would continue to partner with other organizations to promote energy independence and mitigate the consequences of Climate Change.