On the success of â€œParizaadâ€, producer Momina Duraid has something to say 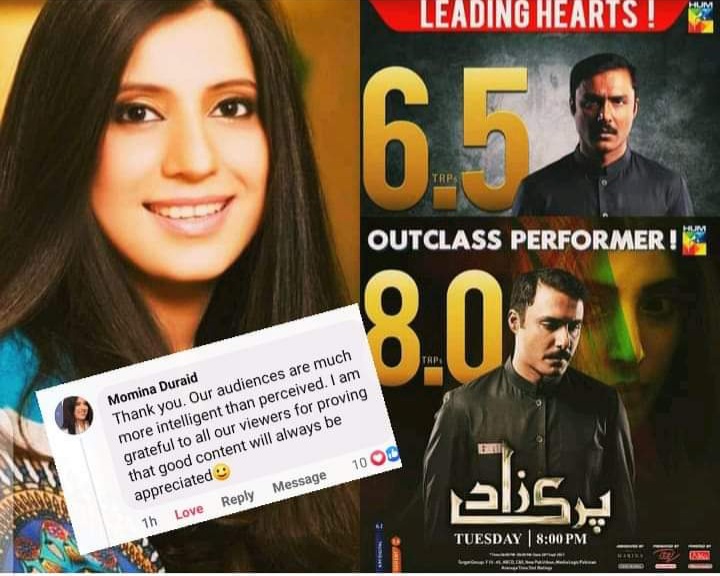 Every once in a while, HUM TV drops a serial that challenges the formula-based productions. Most of the times, those serials have gained huge popularity, proving time and again that the audiences are not as dumb as the channel owners think, but yearn for meaningful content to feed on. A few such examples have been â€œShehr e Zaatâ€, â€œIshq Zahe Naeeebâ€, â€œSang e Marmarâ€ and â€œUdaariâ€, all of which were trailblazers, neither inspired of dramas preceding them, nor trying hard to attain ratings but managing to attain success nonetheless.

One such current example is â€œParizaadâ€. Written by Hashim Nadeem and directed by Shahzad Kashmiri, â€œParizaadâ€ emerges as different not only because it is a male-oriented story while the times are known for showing only woman-centric serials, but also because it challenges multiple stereotypes. From skin colour to masculinity, the serial starring Ahmad Ali Akbar refutes a lot of societyâ€™s fixed notions.

â€œParizaadâ€, amidst the chaos of countless drama serials revolving around more or less the same topics, has attained a lot of attention and popularity for bringing content that has a lot more to offer than saas-bahu conflicts. Even the channel producers are left awe-struck at the response â€œParizaadâ€ has received, for it had become habitual of them to say that Pakistani viewers are shown domestic stories because that is the only thing they like to watch.

Following the success of the serial, HUM TVâ€™s producer Momina Duraid said, â€œThank you. Our audiences are much more intelligent than perceived. I am grateful to all our viewers for proving that good content will always be appreciated.â€

It seems that Pakistani viewers were being under-estimated by the majority of the people heading our channels, for all of them have shown surprise at a story like â€œParizaadâ€ gaining admiration.

It is hoped that channel owners will take this serial and its following as an example and produce more and more off-beat content, now that they know that Pakistanis are not as much tasteless as they think. Â â€œDhoop Kinareâ€, â€œTanhaiyaanâ€, â€œWarisâ€ and â€œAndhera Ujalaâ€, after all, were Pakistani serials remembered to date by all age-groups, and none of them addressed the issues of cousin marriages and saas-bahu rows.