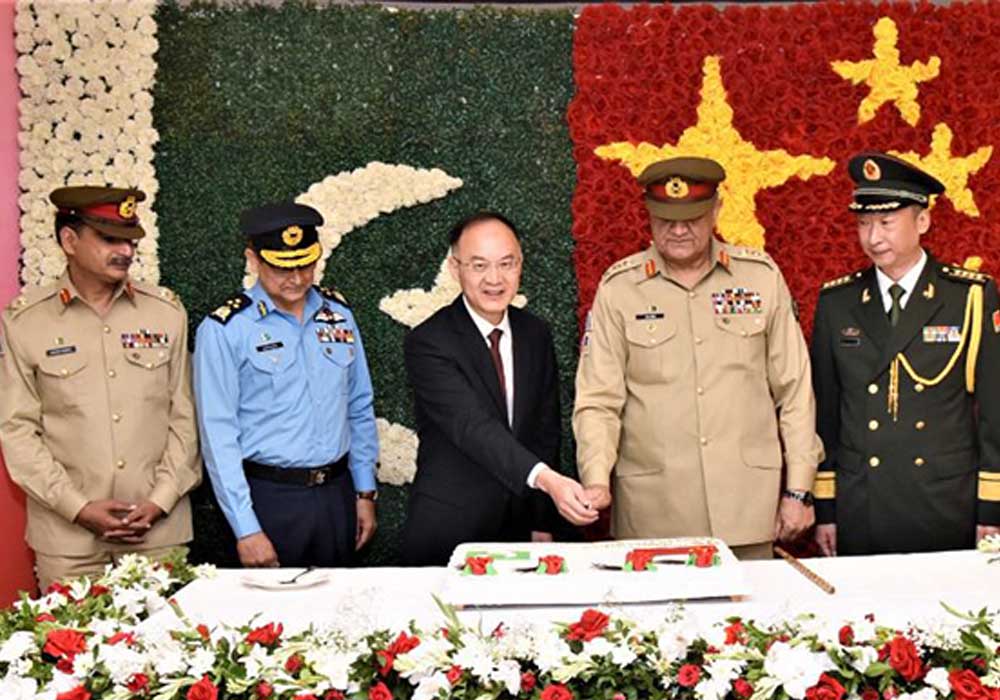 Chief of the Army Staff (COAS) General Qamar Javed Bajwa on Monday said that the relationship between China’s million-plus Peoples Liberation Army (PLA) and the Pakistan Army will continue to contribute to safeguarding the ‘collective interests’ of the two nations.

The army chief, speaking at the 95th founding anniversary of the PLA, which was commemorated at the General Headquarters (GHQ) in Rawalpindi, said the Pak-China relationship was ‘unique and robust’ and has proven its resilience in the face of challenges.

China Ambassador to Pakistan Nong Rong, officials from the Chinese Embassy and officers from the tri-services of Pakistan attended the event, said the statement released by the Inter-Services Public Relations (ISPR).

Speaking at the occasion, the ambassador thanked the COAS for hosting the reception on the eve of PLA’s anniversary.

He said that China and Pakistan were “iron brothers, all-weather friends and strategic partners”.

Ambassador Rong furthered that the recent meeting of the China-Pakistan Joint Committee of Cooperation held in China set up an important platform for military collaboration which would serve effectively for military-to-military relations between the two countries.

The COAS felicitated the PLA and lauded its role in China’s defence, security and nation-building.

Highlighting various facets of the deep-rooted ties between the two states, militaries and the people, the COAS also said the Pakistan-China relationship is unique and robust and had proven its resilience in the face of challenges.

Separately, Ambassador of the Netherlands Wouter Plomp on Monday paid a farewell call to General Qamar Javed Bajwa here at the GHQ and appreciated Pakistan’s role in regional stability.

The COAS said that Pakistan valued its relations with the Netherlands and earnestly looked forward to enhancing mutually beneficial multi-domain relations based on common interests.

He also thanked the visiting dignitary for his services and appreciated his contributions to fostering strong ties between the two countries.

The visiting dignitary ensured to play his role in further improving diplomatic cooperation with Pakistan at all levels.