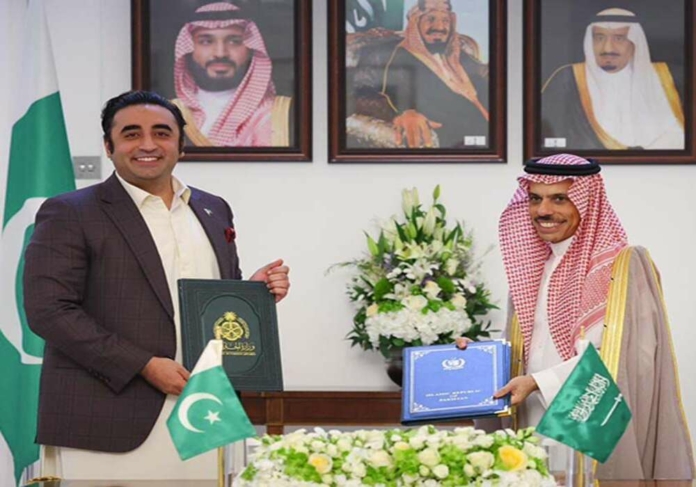 Foreign Minister Bilawal Bhutto Zardari Thursday said that Pakistan wanted to further strengthen institutional linkages with the Gulf Cooperation Council (GCC) and its member states, in line with the Joint Action Plan for Strategic Dialogue between the two sides.

The Foreign Minister, who met with Dr. Nayef Falah M. Al-Hajraf, Secretary General of GCC in Riyadh, said that Pakistan would be ready to host the next round of Strategic Dialogue at an early mutually convenient date in Islamabad, a press release issued here by the Ministry of Foreign Affairs said. Highlighting the importance attached by Pakistan to its relations with the brotherly countries of the Gulf, Bilawal Bhutto Zardari said that Pakistan sees GCC as an important player in the region that can play a vital role in further expanding political and economic ties between Pakistan and Gulf states.

The Foreign Minister and the Secretary General reviewed the status of Pakistan’s ongoing engagements and cooperation with the GCC and its member states. He expressed satisfaction on the trajectory of the relationship and underscored the need for continuing this momentum going forward. The Foreign Minister also highlighted the need for early finalization of the ongoing negotiations on Pakistan-GCC Free

Trade Agreements and asked technical teams from both sides to synergize their efforts to achieve this common objective. The Foreign Minister and the Secretary General also shared views on regional and global issues including Indian Illegally Occupied Jammu and Kashmir (IIOJK), Afghanistan and Yemen. He briefed the Secretary General on Pakistan’s position and assessment on these issues and highlighted that Pakistan and the GCC countries have convergences of interests and positions on all issues of common concern.

Foreign Minister Bilawal and Prince Faisal bin Farhan Al Saud, the Foreign Minister of the Kingdom of Saudi Arabia Thursday held wide-ranging discussions on host of issues related to political and security domains. The two foreign ministers held these discussions as they jointly chaired inaugural session of the Ministerial Committee of Political and Security Pillar of the Saudi-Pakistan Supreme Coordination Committee, held in the Saudi Ministry of Foreign Affairs.

Underscoring the longstanding fraternal and strategic ties between the two countries, Foreign Minister Bilawal Bhutto Zardari expressed his resolve to further strengthen cooperation across entire spectrum of bilateral relations to realize the aspirations of the leaderships of the two countries, achieve common objectives and push their relationship to reach greater horizons.

The two sides shared assessment of the changing regional and global environments and reaffirmed their commitment to continue coordinating positions on all issues of common concern including, among others, Indian Illegally Occupied Jammu and Kashmir (IIOJ&K), Afghanistan, Yemen and Syria. Foreign Minister Bilawal Bhutto Zardari reiterated Pakistan’s firm support for safety and security of the Kingdom of Saudi Arabia, a press release issued here by the Ministry of Foreign Affairs said. He stressed the importance of continued coordination between the two countries on combating activities of terrorist groups that aim to undermine the security and stability of the regional countries.

The Foreign Minister also highlighted the need to further strengthen institutionalized linkages between the two countries to counter threats in the security domain; including cyber security, counter terrorism and its financing, organized crimes, drug trafficking and money laundering. He expressed satisfaction on existing military and defence ties between the two brotherly countries and underscored Pakistan’s commitment to further bolster cooperation in this area.

The meeting was held under the framework of Saudi-Pakistan Supreme Coordination Council which is chaired by the Prime Ministers of both countries. Senior officials from the Ministries of Foreign, Defence, Interior and the Security and Intelligence Services of both countries also attended the meeting.