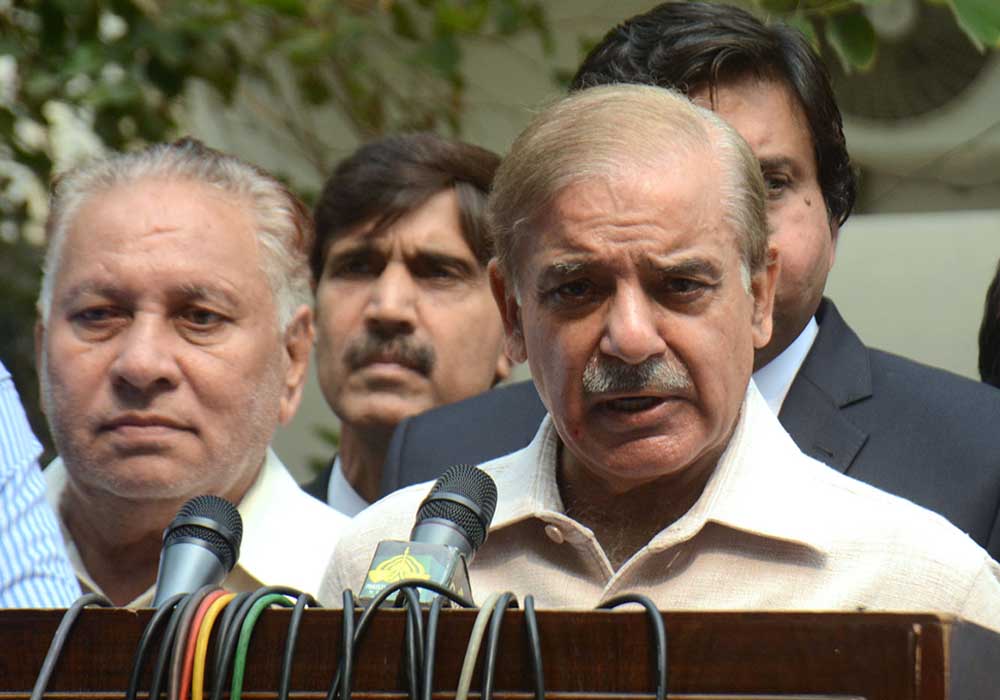 Prime Minister Shehbaz Sharif on Saturday came down hard on his predecessor Imran Khan, calling him a “fraud and a liar” as he excoriated the Pakistan Tehreek-e-Insaf (PTI) chairman for “bidding in the Prime Minister’s House”.

“Pakistan’s prime minister was bidding [for people] in the PM house,” PM Shehbaz said outside Special Central Court in Lahore.

“He had set up a market of buying and selling and consciences were being sold. Could there be a bigger crime than this by a sitting PM,” the prime minister asked as he referred to the recent audio leaks in which Imran can be allegedly heard speaking buying “five”.

On Friday, two more damning audio tapes purportedly featuring the PTI chief came to the fore, suggesting his plans for horse-trading of parliamentarians and using a “US cipher” to brand those who would vote against him in April’s confidence vote as traitors.

“From where did you arrange the money, from the national treasury or Farah Gogi and others giving jewels? From where?”

Both audio leaks, which have not been independently verified and the veracity of which cannot be authenticated, seemed to be from April when Imran was in power and the no-confidence motion – that later led to his ouster – had been tabled in the National Assembly.

He said that Imran Khan claimed to have built many hospitals and universities in Khyber Pakhtunkhwa, but all these statements were false. “I have never seen such a deceitful person in my life,” he added.

The prime minister said that he appeared before the special court and it proved that the PML-N respected the courts and law, adding that be it a prime minister or a governor, no one was above the law. He said that it was the reason that Nawaz Sharif, along with his daughter Maryam Nawaz, appeared before the Rawalpindi Accountability Court for several times a day in 2017 but never sought any NRO from the court. “Rather, he wrote a letter to the Supreme Court of Pakistan for investigations into the Panama Papers scandal.”

“Nawaz Sharif and his daughter endured the worst hardships for many years, besides other party leaders,” he added.

He said that Maryam Nawaz had contested her case on merit and she was not acquitted under the amended NAB law, rather, the IHC acquitted her as per case facts and original NAB law.

He also questioned the clean chit given to Farah Khan by the Punjab Anti-Corruption Establishment a few weeks ago.

The premier went on to lambaste Imran for “lying day and night and bringing disrepute to Pakistan”.

“The way our relations with the US were destroyed […] we are now making efforts to mend relations. I have never ever seen a bigger conspiracy against Pakistan […] he is an example of the worst kind of mindset in the world.

“And I feel compelled to say that I have not seen in my life a bigger liar, conspirer, deceiver, and one with a fraud mentality,” he reiterated.

PM Shehbaz then urged the nation to think. “When we came into the government, we were at the brink of default. But we prevented that […] these are the bitter truths.”