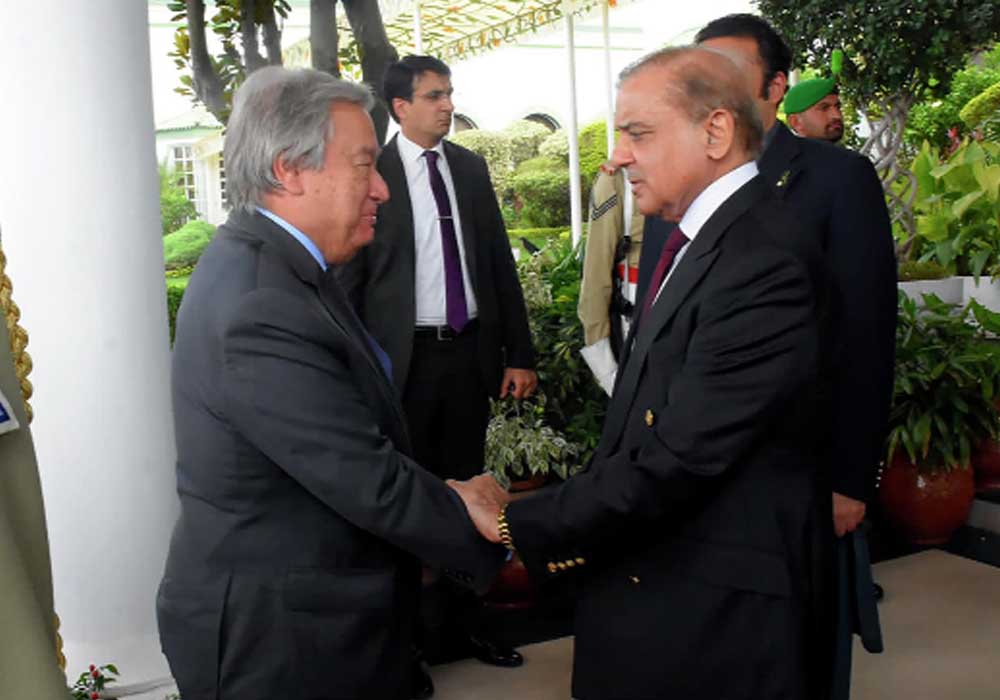 Prime Minister Shehbaz Sharif on Sunday reached Geneva along with a high-level delegation to co-chair an international conference on ‘Climate Resilient Pakistan’, along with UN Secretary General Antonio Guterres today (Monday), aimed at marshalling support to rebuild the country after devastating floods in what is expected to be a major test case for who pays for climate disasters.

In the conference, Pakistan will outline the framework vision for rehabilitation and reconstruction and emphasis upon the need for global support and long-term partnership to implement it.

In the inaugural high-level opening segment, Pakistan would place a comprehensive post-disaster framework plan for recovery, rehabilitation and reconstruction before development partners and friendly countries.

Before leaving for Geneva, Shehbaz said in a statement, “Bridging the funding gap is key to restore critical infrastructure, rebuild lives and livelihoods and revive economy.”

He said that millions of Pakistanis, affected by unprecedented devastation due to floods, looked for compassion and solidarity to build back better. “Humanity is at an inflection point in the world history. Our actions today will shape the resilient future for our succeeding generations,” the prime minister posted on his Twitter handle.

He said that he would take the opportunity to present the case of flood victims before the world. “I will also throw light on steps my govt. has taken for relief and rehabilitation,” he further posted.

In Pakistan, record monsoon rains and melting glaciers last September displaced some 8 million people and killed at least 1,700 in a catastrophe blamed on climate change.

Most of the waters have now receded but the reconstruction work, estimated at around $16.3 billion, to rebuild millions of homes and thousands of kilometres of roads and railway is just beginning and millions more people may slide into poverty.

Shehbaz Sharif will present the recovery framework at the conference where United Nations Secretary General Antonio Guterres and French President Emmanuel Macron will also speak. The prime minister and the UN secretary general will also hold a joint press stakeout. Guterres, who visited Pakistan in September, has previously described the destruction in the country as “climate carnage”.

“This is a pivotal moment for the global community to stand with Pakistan and to commit to a resilient and inclusive recovery from these devastating floods,” said Knut Ostby, United Nations’ Development Programme’s Pakistan representative.

The conference will bring together governments, leaders from the public and private sectors and civil society to support the people and the government of Pakistan.

The reconstruction framework to be presented before the conference will lay out a multisectoral strategy for rehabilitation and reconstruction in a climate-resilient and inclusive manner. Secondly, Pakistan will try to secure international support and forge long-term partnerships for building Pakistan’s climate resilience and adaptation.

Additional funding is crucial to Pakistan amid growing concerns about its ability to pay for imports such as energy and food and to meet sovereign debt obligations abroad.

However, it is far from clear where the reconstruction money will come from, especially given difficulties raising funds for the emergency humanitarian phase of the response which is around half funded, according to UN data.

At the COP27 meeting in Egypt in November, Pakistan was at the forefront of efforts that led to the establishment of a “loss and damage” fund to cover climate-related destruction for countries that have contributed less to global warming than wealthy ones.

However, it is not yet known if Pakistan, with a $350 billion economy, will be eligible to tap into that future funding.

Organisers say around 250 people are expected at the event.

Pakistan’s ambassador to the UN in Geneva, Khalil Hashmi, said Islamabad was willing to pay for about half of the bill but hoped for support from donors for the rest. “We will be mobilising international support through various means,” he said. “We look forward to working with our partners.”

An International Monetary Fund (IMF) delegation will meet Finance Minister Ishaq Dar on the sidelines of the conference, a spokesperson of the lender said on Sunday, as Pakistan struggles to restart its bailout programme.