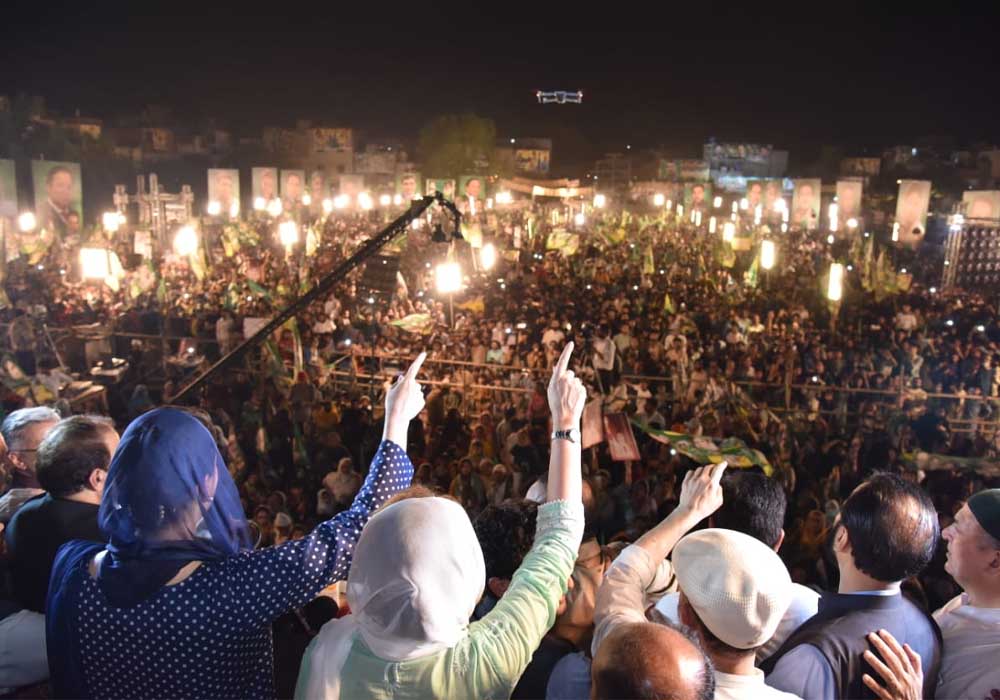 Pakistan Muslim League-Nawaz (PML-N) Vice President Maryam Nawaz on Saturday said the mandate of Punjab was robbed in 2018 and the progress of Punjab and Lahore was put on halt the day the mandate of her party was stolen.

“The people gave mandate to the PML-N but it was handed over to [former Punjab chief minister Usman] Buzdar and Farah Gogi,” Maryam said while addressing charged party workers in PP-167 Green Town constituency, as she formally started electioneering for the much-anticipated by-elections to be held on 20 provincial assembly seats of Punjab on July 17.

Maryam said that Shehbaz Sharif gave subsidy on flour and sugar despite the fact that the national kitty was empty. “I know that people are in trouble due to inflation and electricity shortage but I assure you that all the problems will be solved,” she said. She added that the PML-N had set up power plants in 2018, but former prime minister Imran Khan could not arrange oil for the plants and therefore “we are facing load shedding”.

She said the opponents thought that she would not come out in public but “see, I am here among my people”.

Maryam said the Pakistan Tehreek-e-Insaf (PTI) chairman’s party would have nothing minus turncoats. She said that inflation had prevailed during the last four years and it was not accumulated during the last three months alone. Criticising Imran, she said that he terms the National Assembly a fake, but the Khyber Pakhtunkhwa assembly was deemed real. The MNAs of PTI are taking salaries but Imran Khan is saying that the National Assembly is a fake, she added. “Give your vote to PML-N if you want to secure your future and want to get electricity,” said Maryam.

Maryam also revealed that the International Monetary Fund (IMF) had told the coalition government that it did not trust Pakistan because of the wrongdoings of Imran Khan.

She termed the agreement signed with the fund by the previous government a “bad deal”, adding that the former prime minister took a U-turn by breaching the clauses that Pakistan agreed with the global lender.

At the outset of her speech, Maryam claimed that PML-N supporters from a single constituency present in Green Town were more as compared to the number of people attending Imran Khan’s “historic rally” in Islamabad’s Parade Ground.

The by-elections on 20 seats got much importance and it will be ‘make or break’ situation for both the PML-N and the PTI. Punjab will be in control of the party that gets more seats in the by-elections, so the main leadership of both the parties is seen running the campaign.

Former MPA Nazir Chohan is the party’s candidate from the PP-167 Green Town constituency, who was de-seated by the ECP for violating the party policy as he had cast his vote in favour of Hamza Shehbaz on April 16 in the election of Punjab chief minister. Chohan got elected as an MPA on the ticket of the PTI in 2018 but now he is contesting on the ticket of the PML-N. For the next two days, Maryam Nawaz will visit the constituencies of Lahore.