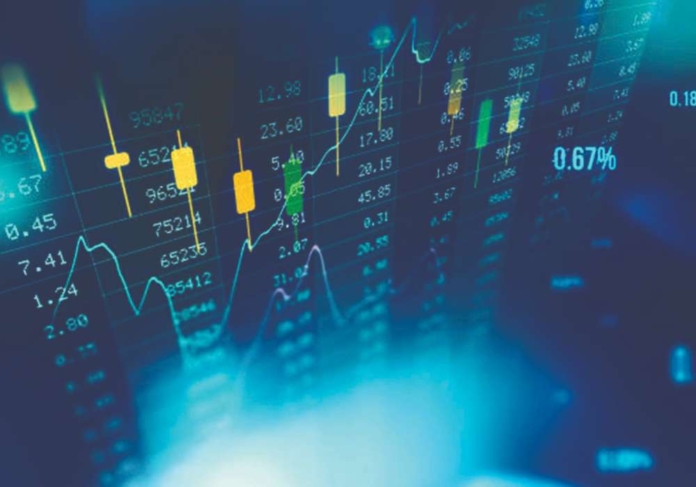 The Pakistan Stock Exchange (PSX) nosedived on Monday due to rollover week and massive hike of 150bps in policy rate by the State Bank of Pakistan, with the benchmark KSE-100 Index shedding 744.41 points (-1.63 percent) to close at 45,745 points.

The overall market volumes decreased by 42.31 million to 261.90 million. Total volumes traded for the KSE-100 Index remained 126.43 million shares. The number of total trades decreased by 1,626 to 109,279, while the value traded decreased by Rs1.06 billion to Rs10.94 billion. Overall market capitalisation decreased by Rs104.90 billion. Among scrips, TRG topped the volumes with 22.37 million shares, followed by BYCO (21.6 million) and TPLP (15.81 million). Stocks that contributed significantly to the volumes include TRG, BYCO, TPLP, TREET, and GTECH, which formed around 32 percent of total volumes. The sectors taking the index toward south were cement with 184 points, technology and communication with 153 points, oil and gas exploration companies with 90 points, fertilizers with 70 points and textile composite with 38 points. The most points taken off the index were by LUCK which stripped the index of 96 points followed by TRG with 87 points, SYS with 56 points, ENGRO with 39 points and MCB with 38 points.

The sectors taking the index toward north were sugar and allied industries with one point, closed-end mutual fund with 0.64 points and modarabas with 0.4 points. The most points added to the index were by MEBL which contributed 37 points followed by BAHL with 14 points, UBL with 12 points, BAFL with four points and ATLH with two points. According to experts, there is an acute lack of investor confidence in the market; however, the market may improve in the next couple of days. They said that the massive hike in interest rate dented the market badly. They said that investors were preferring small shares, which may cause huge losses for small traders.

They said that the government seemed nowhere and that was the main reason behind the volatile market. They said that market seemed to be an orphan as neither the PSX management nor the Securities and Exchange Commission of Pakistan was playing a role to stabilise the market.