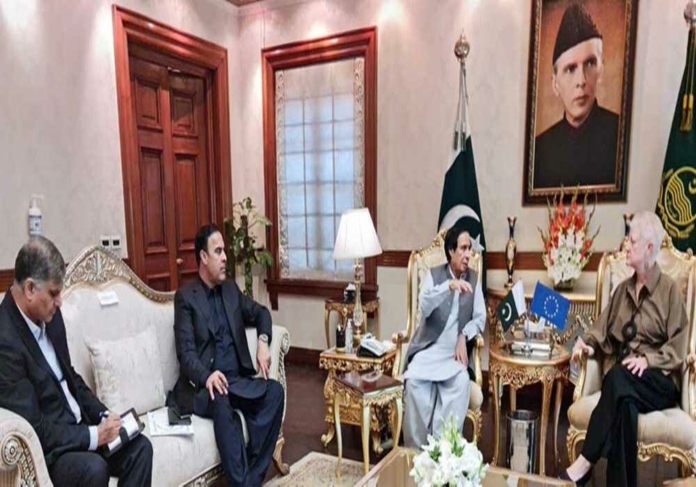 Ambassador of the European Union (EU) Dr Riina Kionka called on Punjab Chief Minister Chaudhry Parvez Elahi at his office on Tuesday and discussed the promotion of cooperation in various fields, especially the construction of new water reservoirs and small dams.

They discussed measures taken for workers’ and minorities’ welfare, elimination of child labor and human rights situation. The CM thanked the EU for its support during the corona pandemic and termed it a major trade partner of Pakistan. He said that the Punjab government plans to build two dams on River Chenab. Similarly, small dams would be built for the hill torrents of Koh-e-Sulaiman to save the rainwater for agricultural purposes. The EU’s technical support for these projects would be appreciated, he maintained.

The Punjab government had also planned to build houses for the flood victims through Akhuwat Foundation and the EU can also support this project. Meanwhile, road repair work had been started in the flood-affected areas, the CM added and pointed out that laws were enacted to eradicate child labour. The government was making laws more stringent to curb this menace.

Alongside this, the implementation of labor laws had also been ensured while taking steps to protect workers’ rights and the welfare of their children. Social security hospitals have been built for the workers and their families, where the treatment was free, he noted. The children of the workers were given a marriage grant and the amount of the grant had also been increased, the CM said.

The government was working to provide necessary facilities to the detainees in the jails, he said adding that the food menu for the prisoners had been improved. Schools have been built to educate children confined with their mothers in jails and a free legal aid system had been introduced for hapless inmates, the CM added. The jail reforms package would be approved by the cabinet and its bill would be approved by the Assembly, he added.

The CM said that the Punjab government had taken effective steps to protect human rights. All minorities have equal rights in Pakistan and special funds have been allocated for their welfare. A quota had been fixed for minorities’ educational admissions and jobs. The CM said that Pakistan and the EU countries have very friendly-relations and the government values the EU’s cooperation regarding the improvement of social sectors.

The EU ambassador expressed regret over the loss of life as well as properties in floods and said that assistance in the dams projects would be reviewed. Cooperation with the Punjab government in the fields of textiles, manufacturing, and small and medium enterprises (SMEs) would be increased. The first consular of the EU Daniel Clauss, Advisor Hasnain Iftikhar, Principal Secretary to Chief Minister Muhammad Khan Bhatti, finance secretary and other officials were also present.

Chief Minister Punjab Chaudhry Parvez Elahi appreciated the societal role of Akhuwat during a meeting with its founder Dr Amjad Saqib at his office. In collaboration with Akhuwat, the government would fulfil the dream of owning a house for low-income people as the government was going to relaunch the loan program of house construction for the low-income stratum. The CM approved the renewal of the agreement between the Punjab government and Akhuwat and 800 million rupees through the Punjab Housing and Town Planning Agency.

The CM said that the Akhuwat microfinance organisation would provide loans to necessitous people for the construction of houses. Loans will be given on a priority basis for the construction of houses in flood-affected areas; he added and asserted that providing a roof to the flood victims is a priority. The provincial government would lend support to building houses as the federal government has not given anything to the flood victims and they would be given possible resources to build houses.

Amjad Saqib said that 100 percent recovery has been ensured in Akhuwat loans given to 2.5 million families. Low-income families were assisted to build 36 thousand houses; he said and stated that Chaudhry Parvez Elahi’s passion for resolving the common man’s problems is commendable.

Also, Chief Minister Elahi has applauded the Multan police for arresting the person accused of the murder of PTI leader Tahir Hameed Qureshi. In a statement, the CM lauded the performance of Regional Police Officer Multan Raja Riffat, CPO Khurram Shahzad Haider and the investigation team. The police have traced the blind murder case in a short period.