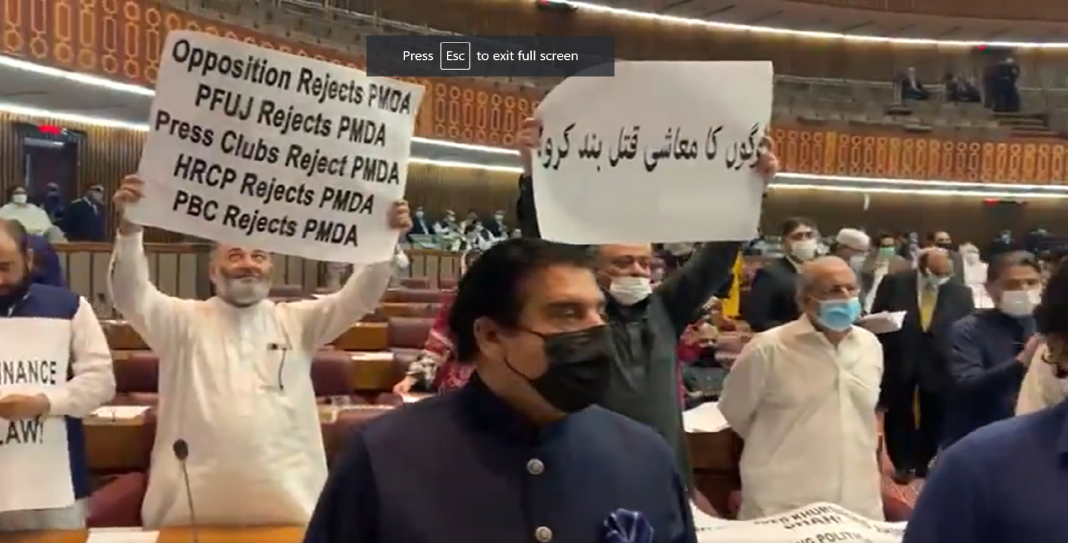 The opposition parties demonstrated against the Pakistan Media Development Authority (PMDA) during the joint session of parliament as the media fraternity continued their sit-in outside the Parliament House on Monday.

Journalist Waqar Satti posted a video on Twitter that showed unorderly ruckus inside the parliament as opposition leaders held placards and chanted slogans against the PMDA. Members of the National Assembly labelled the proposed ordinance a ‘media martial law’ and walked out on the session to join protesters who took up the same cause outside.

On Sunday, the Pakistan Federal Union of Journalists (PFUJ) called upon the media industry and other civil society members to rally together against the PMDA. Protesters responded to the call and came out with banners and chanted slogans against what they deemed to be the government’s agenda to curtail media freedoms.

Monday’s walkout was not the first instance that opposition law makers resisted the PMDA. Bhutto-Zardari had previously labelled the legislation a ‘black law’. Aurangzeb also expressed displeasure at the heavy security apparatus that was deployed by the government to monitor ‘peaceful’ protesters ahead of their gathering on Sunday.

The PMDA was proposed by the government in June as a monolithic media regulatory authority that would control print, broadcast, and digital media. An unpopular measure under the PMDA would enforce fines up to Rs250 million on TV channels and digital media for ‘violations’. Under the new ordinance, the body would also be solely responsible for granting No Objection Certificates (NOCs) to produce new content across digital, print and broadcast platforms.