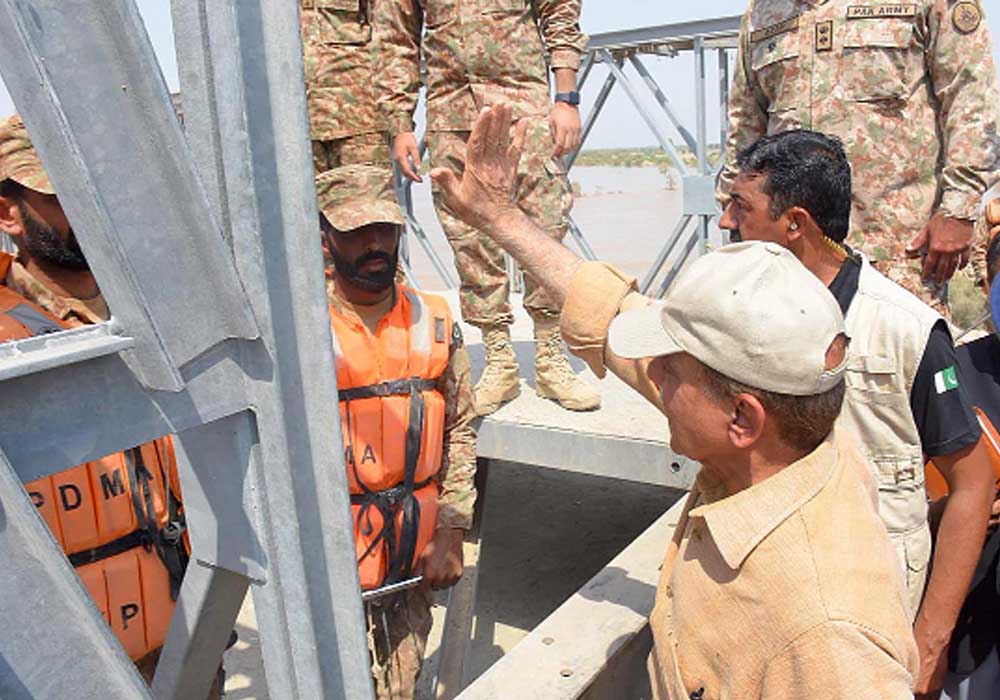 Saying that “trillions” were needed for relief and rehabilitation activities after floods, Prime Minister Shehbaz Sharif on Wednesday stressed the need for a “sustainable system” to cope with the challenges of climate change.

During his visit to Dera Ismail Khan to review the ongoing restoration and rehabilitation work in flood-affected areas, the premier said, “The country is grappling with an unprecedented situation, witnessing floods that have resulted in the loss of lives, infrastructure and crops.”

He said it was time to “rise above politics” and demonstrate the spirit of service and welfare.

Revisiting the damage caused by floods in Swat, he regretted the construction of hotels and resorts alongside rivers.

He announced that a sum provided by a philanthropist for flood relief would be used for building 100 houses in DI Khan, each having two rooms and a toilet, to accommodate widows and orphans in the first phase. He set a timeframe of two weeks for building the houses, saying that he would personally visit the site to assess whether the project could be replicated in other areas.

Moreover, announcing an earlier decision to increase the amount set aside for flood relief under the Benazir Income Support Programme, the premier said that under the package, every flood-hit household would be given Rs25,000. “Besides, Rs1 million will be given in compensation to the relatives of the deceased.”

He said the government had also ordered 200,000 tents for the people displaced by floods.

He lauded politicians, local administration and the armed forces for “acting in unison while contributing to the rescue and rehabilitation” of flood-affected citizens across the country, and expressed his gratitude to friendly countries for their support and assistance.

Earlier, Shehbaz was briefed on the losses caused by floods, with the DI Khan deputy commissioner (DC) stating that heavy rains from August 17 to August 27 had wreaked havoc in the district, affecting 70 per cent of its population.

A National Highway Authority (NHA) official told the premier that 600-kilometre-long N-55 DI Khan-Razmak thoroughfare was restored in two days, while N-35 Karakoram Highway up to Kuchal Nullah towards Kohistan was restored by the Frontier Works Organisation (FWO). The prime minister also visited the Saggu Bridge during his trip and was told that it was swept away due to flash floods. The bridge is located on N-50 National Highway, connecting DI Khan with Kuchlak.

Shehbaz was told that after the first spell of torrential rains and floods, the bridge was repaired in two days, while its reconstruction was underway following a second hit by floods.

He recalled that during his previous visit to Tank and DI Khan after floods, the people were in the phase of rehabilitation until the floods hit them twice. The prime minister outlined the damages to crops and livestock by floods, which earlier used to be the means of livelihood for the locals.

Meanwhile, during his visit to Sehwan, Shehbaz said parts of Pakistan seemed “like a sea”.

“You wouldn’t believe the scale of destruction there,” he told the media. “It is water everywhere as far as you could see. It is just like a sea.” Receding waters post a new challenge in the form of waterborne diseases, he said.

It may be mentioned here that the government also plans to cut Rs150 billion from the Public Sector Development Programme (PSDP) and redirect the funds to flood-affected areas for rehabilitation and reconstruction.