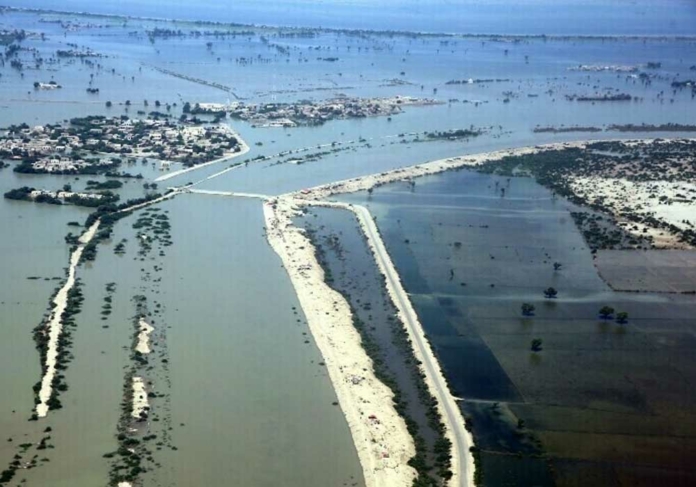 Residents of various villages and localities of Khairpur Nathan Shah, Mehar, Johi and other towns of Dadu district have rejected the provincial government’s claim that floodwaters had been drained out.

Talking to this scribe, they termed the recent statement of government high-ups a joke. They rejected the claims that the floodwaters had almost been drained out or receded through “relief cuts” applied to the dykes and roads with a view to divert waters from flooded areas of the district towards the Indus River.

“Most of the areas in Johi, KN Shah, Mehar and some areas of Jamshoro district are still under waters and thousands of the people are forced to move on boats from one place to another since roads linking the villages with towns are under floodwaters,” claimed Halar Jiskani, who has been at the forefront in running an awareness drive on social media and helping the local people to have access to the media and those organizations interested in providing some help to his area people.

Jiskani went on to add that floodwaters had not only been preventing the residents to resettle several thousand families but was also causing the outbreak of viral infections in various areas of the district. He said that it was height of justice when tens of thousands of the people of various parts of the district had been left at the mercy of the local officials, who according to him were not ready even to plug the so-called relief cuts both to roads and MNV Drain. Halar also rejected the official’s reports claiming to provide all required facilities to affected people across the worst-hit district of the province.

Naveed Qamar Abbasi, another activist who has been raising their voice against the alleged failure of the authorities to tackle the catastrophic conditions in Dadu deplored that they were not still uncertain with regard to sincere efforts and moves by officials bring to things to normalcy in vast areas of the district. He said that it was a fact Dadu unlike other districts not only got unprecedented media coverage and subsequent visits by celebrities from different parts of the world including the Chief of the United Nations but things were not going in the right direction and feared that outbreak of diseases might take a heavy toll on survivors with advent if harsh weather of winter.

Syed Mujahid Hussain Shah, a resident of a village near the famous Manchhar Lake said that the high-ups of the Sindh government on one hand had left the people to suffer from multiple miseries while terribly missing a great opportunity to revive marine life in one of the biggest freshwater lakes of the region. He said that fishermen from Manchhar Lake wee pining high hopes of getting enough fish for them but their hopes and anticipations were also washed away when officials did not plug the cuts to the dykes of Manchhar Lake after its waters receded. His seedlings of fish were not contained in the lake and fishers of the area would have to face similar conditions despite the floods in the lake.