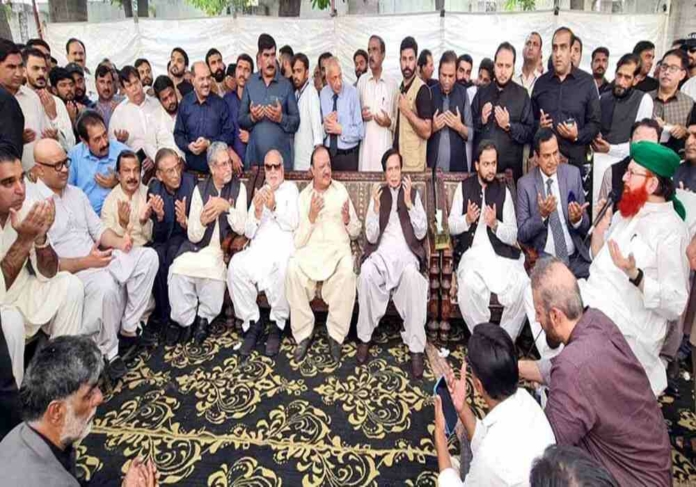 Punjab Chief Minister Pervaiz Elahi claimed on Sunday that “the Sharif family is confined to Islamabad and it will soon be sentenced to life imprisonment in the Model Town case”.

Elahi explained why he and his son Moonis Elahi support Imran Khan despite being from a different political party. Talking to the journalists in Punjab’s Gujrat city, Elahi said that he was already aware of Prime Minister Shehbaz Sharif’s “aristocratic way of thinking”. “What kind of a gift was presented to the nation by making Shehbaz the prime minister of the country?” Elahi ironically said. Taking a jibe at the current leadership, he said that the real face of PML-N had been exposed to everyone, which was the reason we (referring to his son) did not want to be amongst them and preferred to become a supporter of Imran Khan.

Regarding the premier’s foreign trip and how he had been appealing to the international community for aid to alleviate the situation in the flood-hit areas of the country, Elahi said: “It seems that he will also ask [foreign leaders] for a return ticket to Pakistan”. Also, CM Elahi attended the 41st anniversary of Chaudhry Zahoor Elahi Shaheed at Zahoor Elahi Palace Gujrat.CM while addressing the participants on the anniversary of Chaudhry Zahoor Elahi Shaheed and talking with the media persons said that the people have come to know about the reality of Maryam Nawaz after her audio-leak adding that he knew of her reality even before. He stated that the words which Maryam Nawaz used about him are regrettable.

‘I did a lot of good deeds to this family and I always helped the Sharif family. Maryam Nawaz by speaking against me showed her reality and for this reason myself and Moonis Elahi sided with Imran Khan. The thinking of Sharif family toes the same lines of Maryam Nawaz. Shehbaz Sharif is not fearful of Allah Almighty and after going abroad said that he didn’t have to ask for money but is under compulsion, please give money. I was afraid that he would ask for his return ticket from them.

The thinking of Shehbaz Sharif is like that of the Mughals thinking. If Imran Khan gave the call then I ask Rana Sanaullah to show his courage by coming out of Islamabad. The biggest fear to Rana Sanaullah is of Model Town tragedy and InshaAllah will be punished for getting murdered innocent people in Model Town. Cases will be registered against those for unjust murdering the innocent women and children in Model Town. I am against false cases but the cases which will now be registered will be real and based on facts. Not a single case of Nawaz Sharif has finished, now neither anyone can return nor leave and Nawaz Sharif will not return,” CM stated.

In his message on the ‘National Newspaper Readership Day’, Chief Minister Elahi said that newspapers are an important part of lives, were still an essential part and would remain so. He said that newspapers are the most authentic source to derive information, adding that with the newspaper reading the reader not only acquaints himself with the current affairs but also gets easy and inexpensive access to obtain information.