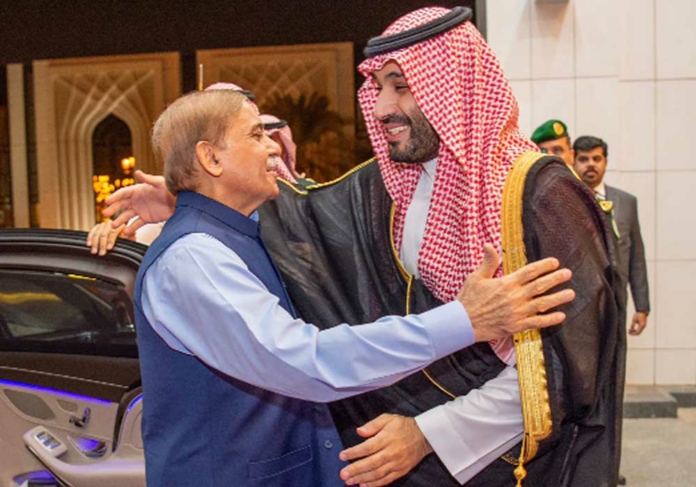 Prince Mohammed and Shehbaz reviewed the historical relations between their countries, aspects of bilateral cooperation, and ways to develop it in various fields. They also discussed regional and international developments.

Earlier in the day, PM Shehbaz Sharif addressed ‘Future Investment Initiative Summit’, where he underlined the need for combined efforts to explore the true potential of clean energy resources, coupled with utilisation of modern tools and technical gadgets to fully harness the talents of young generations.

“I believe Pakistan has uniquely placed to leverage this change. We have one of the youngest populations in the world. Most of these youngsters are equipped with the tools of the new digital world. Their talent is already recognised as Pakistan is the fourth most popular country for freelancing,” he added. The prime minister also proposed Future Investment Initiative to establish a satellite centre in one of Pakistan’s leading universities to explore rapidly growing Pakistani market and spur innovation.

“The satellite could become a centre of network of researchers, innovators, investors, and service providers to harness capacities, which if optimised would take Pakistan to high level of social and economic development,” he added. “Through information technology, e-commerce and innovation we can overcome all challenges, especially political, economic, social, educational, and agricultural and climate change as well,” Shehbaz noted. He also thanked the crown prince for Saudi aid to Pakistan in response to the devastation caused by heavy rains and floods over the summer.