Capital City Police Officer (CCPO) Lahore Additional IG Ghulam Mahmood Dogar on Thursday visited the Governor’s House and ordered snipers stationed at the vantage points around the residence and nearby highrise buildings to keep a vigilant eye on suspicious persons and vehicles.

Ghulam Mahmood Dogar further directed the snipers stationed at the vantage points of the Governor House and nearby highrise buildings to keep a vigilant eye on suspicious persons and vehicles. He also directed the CTO Lahore to ensure alternative traffic arrangements around Governor House and adjacent roads during the protest of a political party.

Separately, Dogar said on Thursday that Lahore Police would provide foolproof security to the Christian community as well as citizens on Christmas. The Lahore Police have chalked out a comprehensive security plan to provide security to churches and Christian community during religious activities and celebrations of Christmas.  More than 6,000 police officers and officials including divisional SPs, SDPOs and SHOs would be deputed at different churches, Christian residential areas, parks and important places of the city.

Dogar directed the police officers to implement the security plan for churches and parks under their own supervision by deputing snipers and commandos for the security of ‘A category’ churches. He said that monitoring through CCTV cameras of sensitive churches, besides search and checking of citizens using walk-through gates and metal detectors would also be ensured. The Commander Lahore Police said that three layers security would be provided to all people visiting churches and parks on Christmas. He further said that teams of elite force, Dolphin Squad, Police Response Unit and also police stations would ensure effective patrolling around the churches, Christmas Bazaars and residential areas of Christmas community.

Search and sweep operations have already been conducted on regular basis in and around churches and Christian residential areas. Checking of vehicles and persons at exit and entrance points of the city had already been enhanced in the wake of Christmas. Persons visiting churches on December 24th and Christmas to attend religious sermons and other activities would only be allowed to enter after complete identification and a thorough checking, he added. 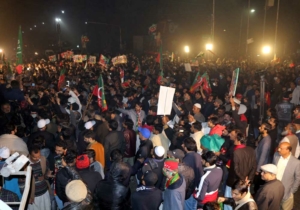