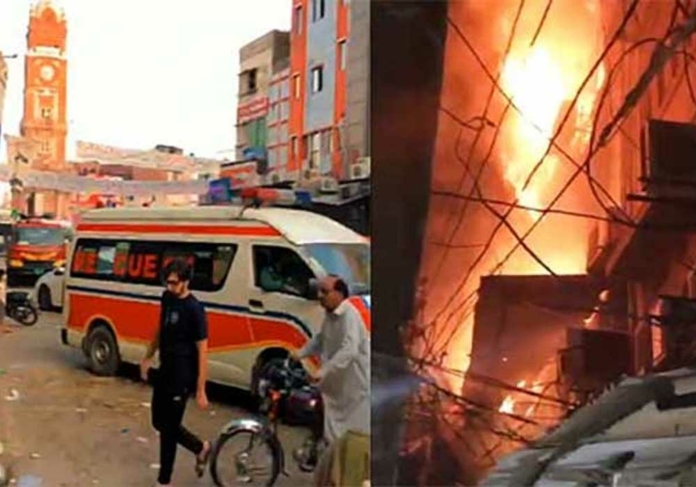 Deputy Commissioner Imran Hamid Sheikh on Saturday issued a notification of two different committees on the tragic accident of fire that happened the other day in Montgomery Bazaar Plaza.

A seven-member committee will conduct a thorough investigation into the cause of the accident and check the response time of the agencies while the 10-member course correction committee will submit a comprehensive report in 10 days including the easy access of the vehicles of the institutions, fire safety measures in case of emergency, including the securing of power lines and transformers in eight markets.

The deputy commissioner held a joint meeting with all the officers concerned and office-bearers of business organizations at Chowk Ghanta Ghar. Besides Assistant Commissioner President Mohammad Umar Maqbool and other officers, Amin Butt, Aslam Bhali, Abbas Haider Sheikh and members of other trade organizations were also present. Expressing deep grief and sorrow over the tragic incident of fire in the plaza, they emphasized the need for a comprehensive inquiry into the incident from the deputy commissioner. And said that a strategy should be devised to prevent such a sad incident on a permanent basis in which the business community will play its full role and support. He said that the blood of seven precious human lives should not go in vain. Chief Executive FESCO Bashir Ahmad said that there should be a full inquiry into the incident. Funds will be estimated to secure power lines in a systematic manner.

The deputy commissioner expressed deep sorrow over the tragic incident of fire in the Plaza and the loss of precious human lives. He said that inquiry course correction committees had been formed and after 10 days they will present the findings of the committees in the presence of traders at the same site. He said that as a representative of the government, he would not leave this matter unfinished and if he has to talk to the higher authorities, he will not avoid it. He said that the under-construction parking plaza is being used for parking in the same condition for the transfer of parking from eight markets, for which steps are being accelerated. There has been a proposal to use the grounds around the bazaars for this purpose, which will be seriously considered. He said that the provincial authorities are also being written for financial assistance to the families of those who died in the incident.