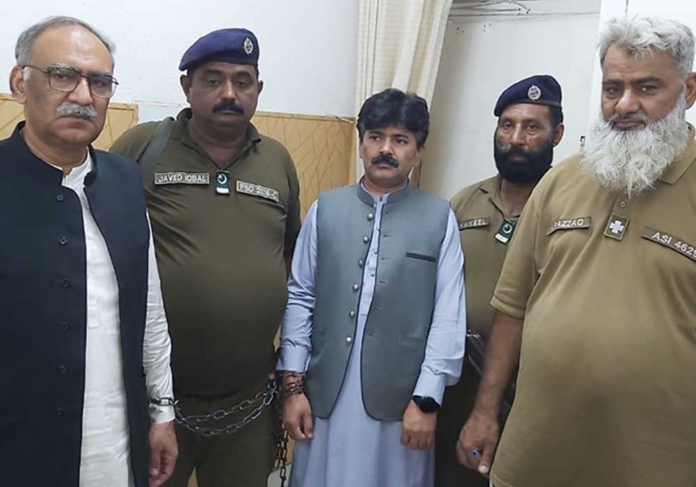 A former chief executive officer of Faisalabad Industrial Estate Development and Management Company (FIEDMC) and secretary of the special economic zone committee have been arrested for selling industrial land worth Rs600 million at a very low price.

Both the officers are accused of allotting industrial plots of Rs600 million to Farah Gogi, a close friend of former prime minister Imran Khan’s wife, for only Rs83 million. The Anti-Corruption Establishment (ACE) Punjab director general has constituted a three-member joint investigation team (JIT) to further investigate the scandal, which has been directed to submit its report within seven days.

ACE Faisalabad Region Sub-Inspector Shahid Sarwar Alvi has taken a stand in the case. It was learned from sources that Farhat Shahzadi (Farah Gogi) and her mother Bushra Khan were allotted 10 acres of industrial land in FIEDMC on easy installments. Former FIEDMC chief executive officer Rana Yousuf and Special Economic Zone Committee Secretary Maqsood Ahmed are allegedly involved in the case, who allotted industrial land worth Rs600 million for only Rs83 million, and the allotment of this industrial land was earlier made to Mahin Enterprises.

According to the FIR, the two officers, in violation of their authority, had allotted 10 acres of land to Farah Gogi and her mother Bushra Khan in the name of the company. The company did not have the required experience nor did it meet the capital value requirements. Both the officers caused loss of millions of rupees to the national exchequer through forgery. The team of ACE Punjab raided and arrested both the officers and registered a case against them under various provisions and started investigation. The ACE Punjab director general has formed a joint investigation team in this case, comprising Deputy Director (Legal) Shahram Muzaffar, Deputy Director Sanaullah Hinjra and Assistant Director Umair Abbas.

According to sources, the value of the company should have been Rs2 billion to acquire a 10 acre industrial plot in FIEDMC, while Farah Gogi and her mother’s company Wealth Estate Mint had a value of Rs700 million. Farah Gogi’s husband Ahsan Jamil Gujjar reportedly gave a fake guarantee of Rs2 billion.

The ACE Punjab is also investigating the assets of Farah Gogi and her husband. According to sources, massive irregularities have surfaced during preliminary investigation into allotment of FIEDMC land. It was also revealed that the arrested accused allotted the land on the orders of former government dignitaries.

According to sources, former National Assembly speaker and committee member Ayaz Sadiq had pointed out massive corruption in the special economic zone in 2021. On this, the CPEC Parliamentary Committee visited Allama Iqbal Industrial City on October 21 last year. Sadiq had also revealed that a property business was being conducted in the FIEDMC, and had called on the Federal Investigation Agency (FIA) to investigate the matter.