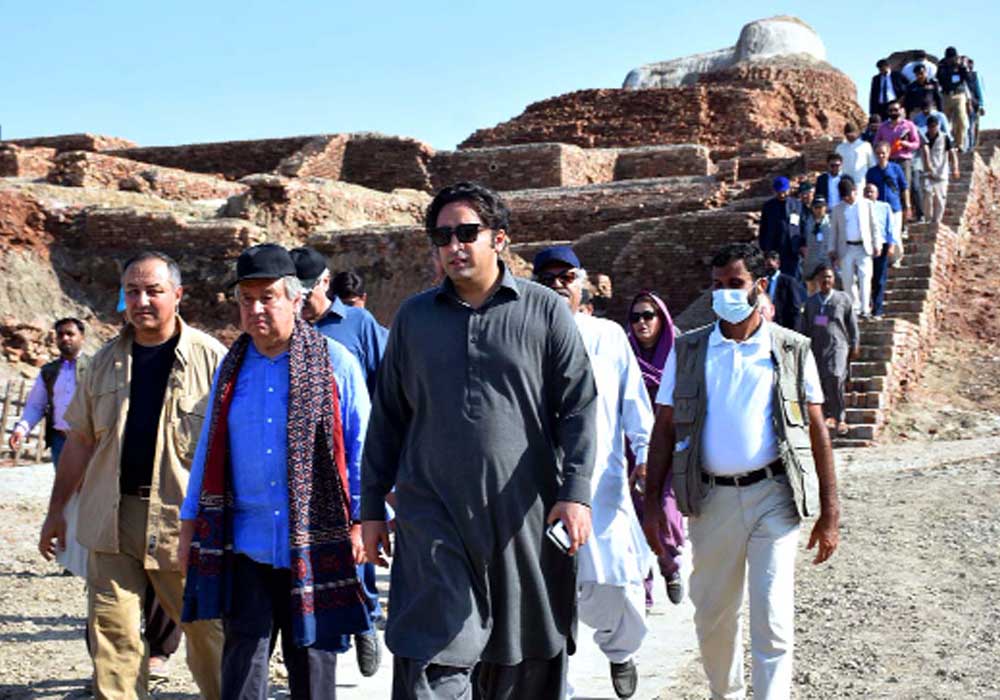 United Nations (UN) Secretary-General Antonio Guterres on Saturday visited Mohenjo-Daro, one of UNESCO’s six world heritage sites in Pakistan, and assured the Sindh government of all possible support to protect the heritage site, showing his concern over the damages caused to it due to heavy rains.

Guterres was briefed by the officials that the site was damaged during the rains that started on July 4 and continued until August 26.

This was the first ever visit to the site by any secretary-general of the United Nations.

Flanked by Foreign Minister Bilawal Bhutto Zardari and Sindh Chief Minister Murad Ali Shah, Guterres arrived in Larkana to inspect the scale of damage caused by the devastating floods to the iconic site.

Bilawal briefed Guterres on the damages conceded by the prehistoric site due to historic rains and floods, the statement added.

Apart from massive human and infrastructure losses caused by monsoon rains 10 times heavier than normal and massive floods, the country risks losing its archaeological treasure, including remnants of the Mohenjo-Daro and Mehrgarh civilisations.

Mohenjo-Daro, also known as the “mound of the dead,” is located 27 kilometres (about 17 miles) from Larkana and has been particularly hit hard by the country’s most destructive monsoon spells and floods in recent history, causing concern among local and foreign archaeologists.

The floodwaters surrounding the quintessential site have damaged several excavated portions, causing water to seep through and create furrows.

Rain and floodwaters seeping into the ground are tilting the walls of the heritage site’s prehistoric houses, which date back to 2,500 BC and are the last surviving remnants of the Indus Valley Civilisation.

This alarming development, according to archaeologists, could potentially lead to the walls completely crumbling and collapsing.

Sindh’s Culture Minister Syed Sardar Shah thanked the UN chief for launching the world appeal after the passionate and powerful presentation about the gravity of the situation by FM Bilawal.

He said the world was now moved and joining Pakistan for the emergency relief and rehabilitation of the millions of affected people, with the worst situation in Sindh.

“Your visit to Pakistan reminds to the world about the severity of the crisis… The United Nations is leading – with all possible assistance – while tackling the global challenge of the climate crisis,” Sardar Shah further said.

According to Pakistan’s Meteorological Department, the site received 211mm rains in July and 950mm in August. On the last day of the monsoon season, 136mm rain was recorded on the site that continued for about 10 hours, damaging the artificial layers in different areas, including DK South, HR Area and Great Bath.

“We have tried our best with the assistance and patronage of UNESCO to keep it conserved and persevered. It is becoming very, very difficult for us now to save this crumbling walls and structures,” Shah said, briefing the visiting delegation.

He said that the provincial government had limited resources, adding that the threats to the centuries-old heritage were abound and would multiply as the threat of climate change deepens and multiplies worldwide.

Since August 27, technical teams have been busy in protecting the site, giving the first-aid, saving the original structure to further damage. Sources told that the conservation work will soon be started with the support of international experts.