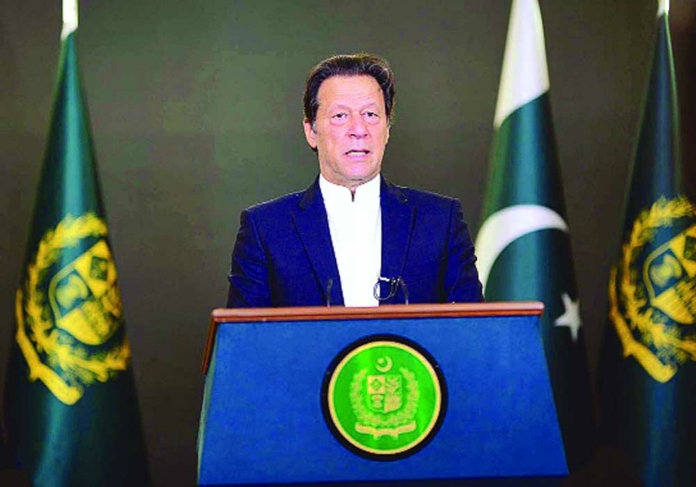 In an interview, the PTI chief reiterated that the party’s intended long march would be historic. He added that he would announce the date for long march on Thursday. The former prime minister added that his party was fully ready this time.

Talking about the foreign policy, the PTI chief said that there is a dire need for an independent foreign policy for the country.

Taking a dig at the ruling coalition government, Imran claimed that the rulers are not interested in strengthening democracy as they are looking to stash money. “They want to put me behind bars so that the masses could not pour onto streets,” the PTI chief added.

Meanwhile, more than 30 religious scholars from Punjab called on Imran Khan in which various issues were discussed.

The delegation, under the leadership of Chairman of Sunni Ittehad Council Pakistan Sahibzada Hamid Raza, met the ex-premier at his residence in Islamabad’s Bani Gala. Former foreign minister Shah Mahmood Qureshi, Senator Shibli Faraz and others were also present at the meeting. The clerics paid tribute to Imran for his services to Islam.

Separately, Bhara Kahu police on Sunday arrested 12 PTI activists for staging protests and “damaging” public property during their protest against the Election Commission of Pakistan’s decision.

Responding, PTI Secretary General Asad Umar alleged that a party worker’s brother had been arrested in Islamabad after the capital police failed to extract the worker himself.

In a tweet, the PTI leader criticised law enforcement agencies in Islamabad for “ripping the law up to shreds” claiming that police arrested Mehtab Bukhari when they could not find his brother – a PTI worker – Murad Bukhari.

“Is this the country’s capital or a jungle?” lamented Umar as he expressed faith that “all those doing illegal work will be brought to justice”.

Moreover, PTI leader Asad Qaiser on Sunday wrote to National Assembly Speaker Raja Pervez Ashraf, urging him to take notice against police for their behaviour towards party’s lawmaker Saleh Muhammad Khan. On October 21, police had taken into custody Saleh and his two security guards from Khyber Pakhtunkhwa police for allegedly shooting at a police contingent deployed outside the ECP.

The incident took place as PTI workers and leaders protested outside the ECP’s office in Islamabad after the commission’s verdict in the Toshakana reference – which disqualified PTI Chairman Imran Khan.

Separately, the PTI strongly criticized the Asma Jahangir conference where anti-army slogans were raised in one of the sessions but no action was taken against the organizers.

Several tweets were shared by official social media accounts of the PTI while questioning the anti-state slogans during the conference.

The tweets shared by the PTI’s official twitter account said that Senator Azam Swati was arrested for making a single tweet against the army chief but no action was taken against those who organized the conference where several slogans were raised against the army.

The PTI added that Federal Minister for Law Azam Nazir Tarar was sitting on the stage when the slogans against army were raised but he didn’t make any interference.

The slogans were raised during the fiery speech of Pashtun Tahafuz Movement (PTM) leader Manzoor Pashteen.

Later, Federal Minister Azam Nazir Tarar said in a tweet that he was disappointed the way a small group of participants behaved at the Asma Jahangir conference by unnecessarily chanting slogans against state institutions and not listening to the achievements so far made for their benefits. “It is the hallmark of democratic society that we must respect each other’s point of view,” Tarar tweeted.