Won’t rest until all flood-displaced persons are rehabilitated: Bilawal 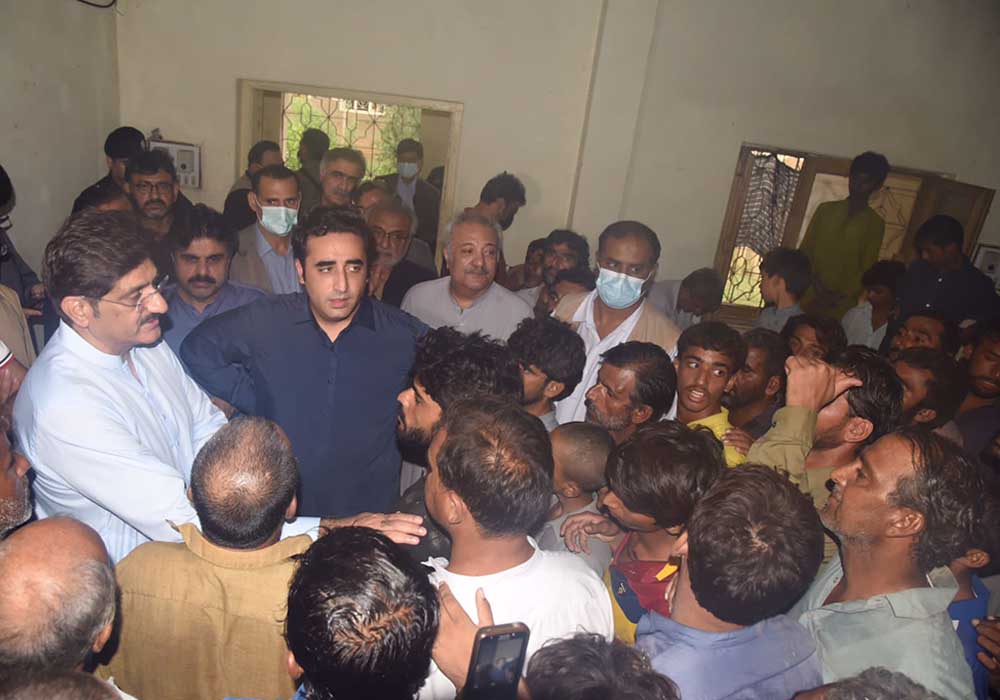 Pakistan People’s Party (PPP) chairman Bilawal Bhutto Zardari on Monday said that the government was fully committed to extending all possible help to those who had been badly affected by heavy downpours across Sindh.

The PPP chairman, who landed at Sukkur Airport on Monday, drove to his home district Larkana along with Chief Minister Syed Murad Ali Shah and other PPP leaders and lawmakers.

In Larkana, he visited the relief camps and met the displaced families staying at various camps. Speaking on the occasion, he said that the government would not rest until all displaced people were rehabilitated in their original localities and villages in all 23 districts of the province.

“We are here to get firsthand knowledge of the problems and issues of the people of Larkana and other districts so that they could be extended the required assistance in their difficult times,” he said. Chairing a meeting at the DC office, he directed the provincial government to ensure the disposal of rainwater from the main roads, streets and houses of the people to enable them to at least move easily and then start rehabilitation works such as repair of houses, drainage and roads.

Bilawal was told that during the three spells of heavy rains, 26 lives were lost and 367 people received injuries in the Larkana district. He was told that the district administration had set up 290 relief camps where 28,500 people were shifted.

The meeting was informed that almost 90 percent of standing crops of rice had been washed away and thousands of houses have been damaged in urban and rural areas for which the survey was being conducted. The rainwater has submerged almost the entire Larkana city and its taluka.

The chief minister said that water has accumulated in the houses of people. He added that the initial relief would be disposal of water from their home for which district administration along with Public health and local government departments start immediately.

Shah said that the Rice Canal was passing through the centre of the city; therefore rainwater should be disposed of into it through pumping machines. “We are planning the construction of a stormwater drain in the city for which experts would be consulted,” he said.

The chairman was told that the rainwater after being accumulated on the streets in Ratodero, Dokri and Bakrani towns was now gushing into the houses which has to be disposed of through machinery. At this, Bilawal directed the administration to procure the machinery and dispose of the water.

He directed the district administration to improve hygiene at relief camps, and provide them food and clean water, electricity and mosquito nets so that they live there safe and sound, otherwise “we would have to fight against the viral diseases”.

Earlier, the PPP chairman just after landing at begum Nusrat Bhutto Airport Sukkur drove directly to Larkana along with the chief minister and visited a relief camp at Technical College where rain-affected people of different areas were settled. The chairman met the people and assured them that they would be looked after properly. “We have rescued you in the first phase and then rehabilitate you in a decent way,” he told them.

While going to the DC office for a briefing, he stepped down from his vehicle when he saw a crowd of people gathered to talk to him. Bilawal consoled them and assured that their government would not leave them alone.