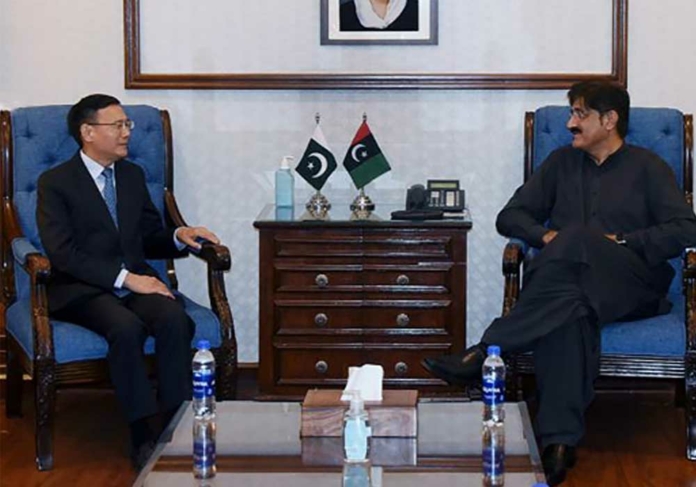 Chinese Consul General in Karachi Li Bijian met Sindh Chief Minister Syed Murad Ali Shah on Friday at the CM’s House and presented a cheque of $100,000 for Karachi and RMB500,000 for CM fund for flood-affected people.

The chief minister thanked the consul general, the Chinese government, and the people for helping the flood-affected people of Sindh.

He said that well-reputed people from the private sector had been inducted into the company constituted for the construction of houses that collapsed during heavy rains so that transparency could be ensured.

“The funds raised or taken as loans from the lending agencies for the construction of the houses for the flood-affected people would be utilised transparently and its audit would be conducted by a well-reputed firm.”

Murad invited philanthropists, the international community, friendly countries, and multinational companies to come over and select a locality/colony or a village for the construction of the collapsed houses and undertake the work from the contractors or construction companies of their choice, adding that the provincial government would extend all kind of support to them.

The CM said that the heavy rains and floods had damaged 3.8 million houses for which his government had negotiated a loan of $500 million to reconstruct the houses, but the number of houses was so huge that more help and assistance was needed to house all the displaced people.

The Chinese consul general told the chief minister that a team of their experts was scheduled to visit the flood-affected areas of the Sukkur division to conduct a survey of collapsed houses and then select the areas to reconstruct them. The CM thanked the Chinese government and the people for helping the Sindh government in the rehabilitation of the affected people.