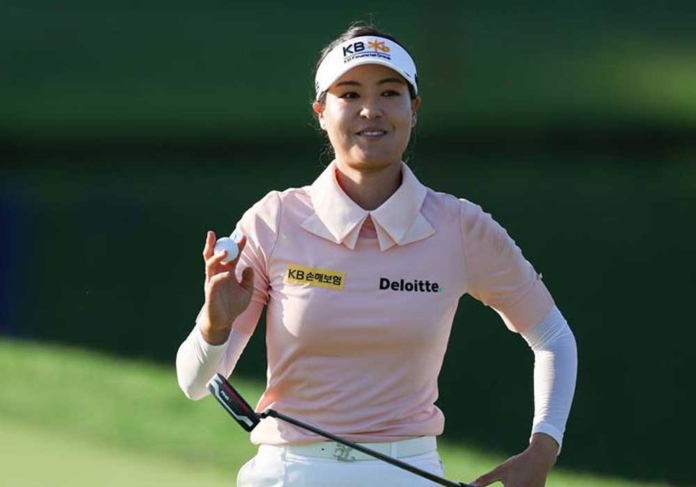 After another sparkling start, In Gee Chun finally hit a wayward tee shot – into the thick rough on the eighth hole at Congressional Country Club. It was the closest she’s come to a shaky stretch through the first two days of the Women’s PGA Championship.

Chun recovered from a couple bogeys on the front nine and shot a 3-under 69 on Friday to increase her lead to six strokes at the tournament’s halfway point. Chun led by five after the first round, equaling the biggest 18-hole advantage in the history of women’s major championships.

Bogeys at Nos. 7 and 8 in the second round prevented her from pulling even further ahead, but she was still impressive in following up Thursday’s stellar performance. “I really donÂ´t want to think about yesterday. It was almost a perfect game I had,” said Chun, who is 11 under par through two rounds. “If I can think about yesterday, then I feel like I couldnÂ´t make good focus on my game today.”

Lydia Ko (67) and Jennifer Kupcho (68) were second. Kupcho took the first major of the season in early April at the Chevron Championship and won a playoff Sunday in Michigan for her second LPGA Tour title.

Kupcho sounds comfortable having to chase down Chun.

“I think being behind and trying to catch up is better,” she said. “I mean, I had the lead at Chevron by a few strokes, so I know how it feels to be in her position. Being behind is at least my preferred way.” Caroline Inglis (68) was another stroke back at 4 under, along with Brooke Henderson (69), Hannah Green (69), Sei Young Kim (69) and Jennifer Chang (70). After wet conditions for the first round brought the courseÂ´s length into focus, it was a clear, warm day Friday, and Congressional was a bit more forgiving. KoÂ´s impressive performance set the tone early on. Like Chun, Ko is trying for her third major title and first since 2016.

Chun began with three birdies in the first five holes. Then she missed the green on the par-3 seventh and took a bogey. On No. 8, a 245-yard par 4, her tee shot went into the rough on the edge of a greenside bunker – the first fairway she’d missed all tournament. Chun punched out of it backwards, then failed to get up and down for par.

Still, those were her only two bogeys of the round, and sheÂ´s kept the field at armÂ´s length. She finished with a birdie on the 433-yard 18th, hitting a 7-iron at a pin positioned toward the back of the green, just in front of the water. She made the 10-foot putt for her fifth birdie of the day.

“I really want to make the finish with birdie, so I try and make really good focus. I did everything on that putt,” she said. “ThatÂ´s why I say IÂ´m so happy I made it.” Hye-Jin Choi and Pornanong Phatlum both shot 72 after first-round 69s. They now trail by eight. Lexi Thompson matched Ko with a 67, highlighted by an eagle when she holed out a wedge from 102 yards on the par-4 17th.

“I took one more club extra to control the spin,” Thompson said. “I had spun back a good amount of shots. So I tried to take one more and chip it, and I ended up spinning it back. It was still really going fast with the spin, but ended up going in. I just went off the crowd because we canÂ´t see anything from down there.” U.S. Women’s Open champ Minjee Lee (68) was with Thompson at 3 under. Defending Women’s PGA champ Nelly Korda (74) was at 1 over.