Current flood situation more difficult than that of 2010-11: Murad 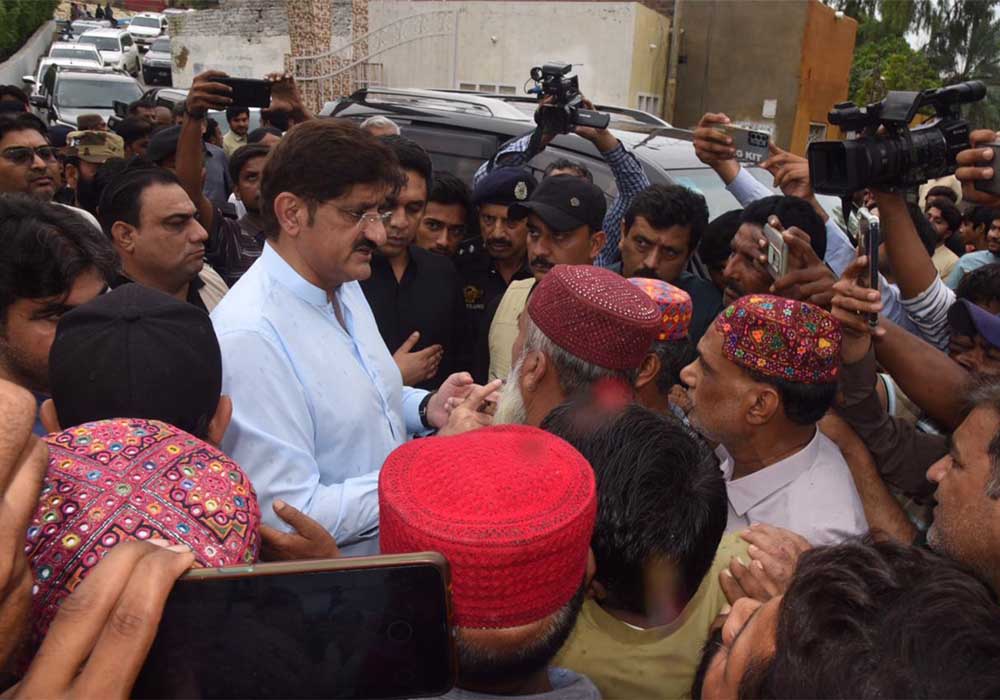 Sindh Chief Minister Syed Murad Ali Shah on Monday said that during the current monsoon season the situation was more difficult than that of floods in 2010 and 2011.

Talking to the media, he said that he was not fond of photo sessions but he was visiting the flood-hit areas after heavy rainfalls and subsequent floods in various districts of Sindh. He said that the heirs of every deceased person would be paid the compensation of Rs1 million.

“Having visited all rural areas of 11 districts, public representatives are there to serve, machinery is there to deal with any situation,” he said.

The Sindh chief minister said that 600,000 cusecs of water would come on Guddu Barrage which would be a high flood, and added that machinery had been provided to strengthen the banks from Sukkur to Kotri to prevent any untoward situation.

He said there had been 500% more rains during four spells of rain. He expressed grief over the loss of human lives due to the collapse of the roofs of houses and other rain-related incidents in different parts of the province. He said that the federal government was helping them with the efforts of PPP Chairman Bilawal Bhutto Zardari

To a question, the chief minister said that there had been as much outflow as there has been inflow at various barrages. “A flood will pass through the river … anyone’s negligence in case of public suffering will not be forgiven. In such a difficult situation, if anyone is negligent, it will be a crime. We have declared all the districts as calamity-hit.”

He said that they were working to drain out water from the cities, and added that another spell of rain was going to hit the province today (Tuesday).

He said that he had arrived in the affected districts to see all the rural areas of 11 districts. “There are public representatives who will keep a check on people involved in hoarding and overcharging, as well as wasting commodities,” he said, adding that stern action would be taken against him.

Meanwhile, Federal Minister of Poverty Alleviation and Social Safety Shazia Marri, while talking to the media after visiting Ehsaas Nashonuma Centre Badin, said that the federal and provincial governments had carried out relief activities to facilitate the rain-affected people, in addition, to draining out the accumulated rainwater from low-lying urban areas.

She said that the federal government had allocated Rs37.5 billion for the poor people of rain- and flood-hit districts, while Rs25,000 would be paid to 1.5 million families under the Benazir Income Support Programme (BISP). She said that the financial assistance to rain-affected people would be ensured transparently, and no illegal deduction from the allocated amount would be tolerated.

She said the PPP had always served the people in difficult situations. She said that under the direction of Bilawal Bhutto Zardari, all possible resources of the federal and provincial governments were being utilised for the relief and rehabilitation of the rain-affected people of the province. She said that recent rains created havoc in the province, including the Badin district, which had also been badly affected.

On this occasion, Princess of Jordan Sarah Zaid, Special Adviser on Maternal & Child Nutrition, World Food Programme, along with Shazia Marri visited the Ehsaas Nashonuma Centre of the BISP where doctors briefed them on the activities of the centre.