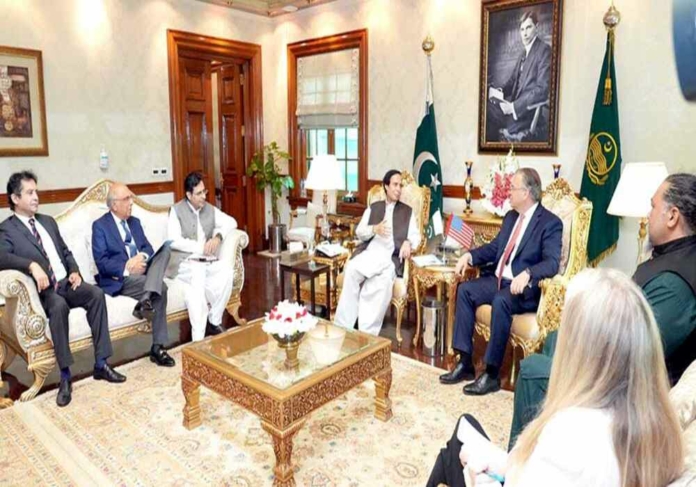 During the meeting, it was agreed to promote partnership in population planning, alternate energy, agriculture and water management sectors.

The CM briefed the envoy about public welfare initiatives and thanked the ambassador for extending support to Pakistan during the coronavirus pandemic.

Pakistan attaches special importance to its relations with the US, the CM said and added that reforms were being introduced in different sectors. “In this regard, the technical assistance from the US would be welcomed.” The CM said that legislation would be enacted to rid educational institutions of drugs and American assistance would be beneficial in this regard.

Elahi said that a special anti-narcotics force would be established and those giving information on the sale and purchase of drugs would be rewarded. Similarly, special courts would be set up to hold a daily trial of drug pushers.

“The incumbent government had resumed the channelization of Koh-e-Suleman water,” he said, adding a plan had been devised to build two big dams on Chenab River. He hoped that the US assistance in research and development would yield positive results to increase agri-productivity.

It was hoped that the partnership between the Punjab government and the US would be promoted as the provincial government was following a public-centric agenda, the CM concluded.

Ambassador Donald Blome said that the US attaches great importance to its relations with Pakistan and that the cooperation with the Punjab government would be further promoted.

Separately, the chief minister stressed the need to improve higher education standard in the province.

Chairing a meeting in this regard, Elahi said that specialized courses would be introduced in universities for industrial development.

“A state-of-the-art engineering university would be established to meet the industrial needs of Gujranwala, Gujrat and Sialkot districts. The University of Applied Engineering and Engineering Technologies would be affiliated with world-renowned universities,” he noted.

The bilateral relations between Pakistan and Saudi Arabia would also be strengthened, he said and added that the Saudi royal family has rendered invaluable services for Islam and Muslims.