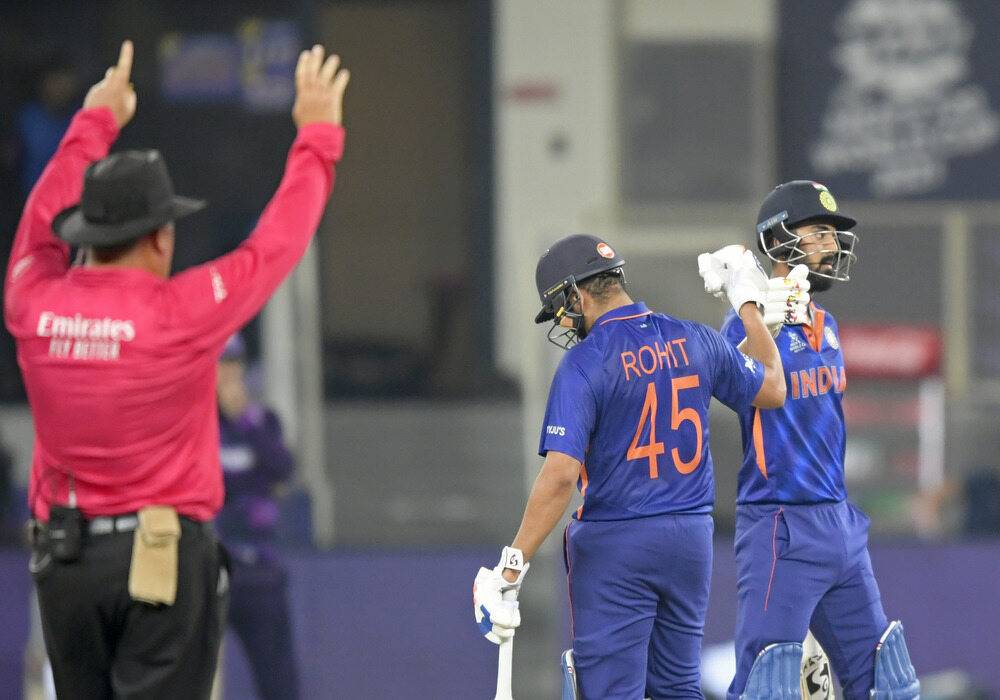 KL Rahul’s 50 off 19 balls helped India stay alive in the Twenty20 World Cup with an eight-wicket thrashing of Scotland inside seven overs on Friday. Ravindra Jadeja and Mohammed Shami took three wickets each to help bowl out Scotland for 85 in 17.4 overs after India put the opposition into bat in the Super 12 contest in Dubai.

Rahul and Rohit Sharma, who hit 30, then took the Scotland bowling apart as India raced to their target in 6.3 overs to radically improve their run-rate.

They still need to win their last game against Namibia on Monday and depend on the result of Sunday’s New Zealand-Afghanistan match to have any chance of making the final four.

Rahul smashed six fours and three sixes in his batting blitz as he raised the fifty in 18 balls before getting out to Mark Watt.

Suryakumar Yadav hit the winning six with skipper Virat Kohli, on his 33rd birthday, relishing the huge win at the other end. Pace spearhead Jasprit Bumrah bowled Scotland captain Kyle Coetzer after the batsman’s seven-ball struggle at the crease. It was a maiden wicket for Bumrah.

George Munsey counter-attacked as he smashed Ravichandran Ashwin for three successive boundaries but Shami cut short the opener’s stay on 24.

Jadeja came on to bowl after the first six overs of powerplay and made an instant impact with twin strikes to send back Richie Berrington, bowled without scoring a run, and Matthew Cross trapped lbw for two.

With Scotland’s top four back in the dugout at 29, Calum MacLeod and Michael Leask put up some resistance during a 29-run stand.

Jadeja broke through with his left-arm spin as he sent back Leask lbw for 21 and Ashwin got Chris Greaves for one.

MacLeod, who made 16, and Mark Watt also attempted to bring some respect to the total but Shami returned to pick up two wickets in one over and Bumrah wrapped up the innings in 17.4 overs.

Earlier Friday, New Zealand stayed on course for the semi-finals with a 52-run win over Namibia.

Group 2 leaders Pakistan have already made sure of a semi-final place with four wins in four games.