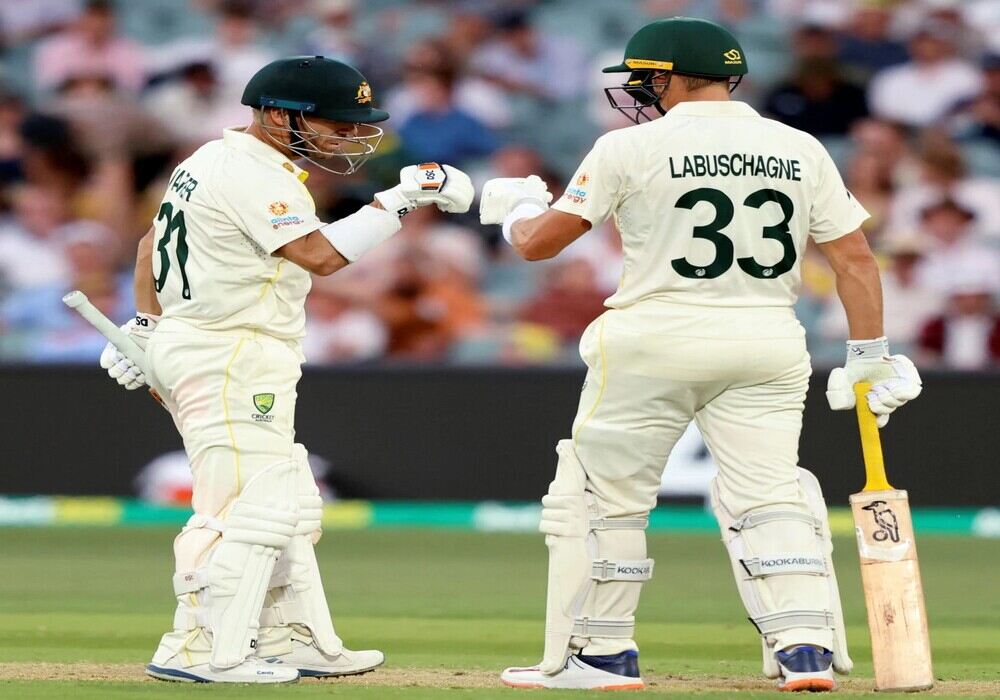 Marnus Labuschagne and David Warner both ground out gritty 95s as Australia seized control of the second Ashes Test on Thursday, surviving an onslaught from veteran English seamers Jimmy Anderson and Stuart Broad.

The visitors came into the day-night Adelaide Test on the back of a nine-wicket mauling in Brisbane but confident they could get back into the five-match series. But even with the greatest wicket-takers in English history back in the side they struggled to make inroads with the pink ball as the home team compiled 221 for two by the close. A consolation for England is that the world’s premier Test bowler, Australia skipper Pat Cummins, was ruled out less than three hours before the start over a Covid scare.

The tourists did snare an early breakthrough with Broad getting Marcus Harris for three, before Warner and Labuschagne put on 172 for the second wicket. Warner looked destined for his 25th Test century as he began to open his bat, but fell in the nervous 90s for the second Test in a row, caught by Broad off Ben Stokes.

Labuschagne almost did the same, also on 95, when wicketkeeper Jos Buttler dropped a sitter off Anderson — much to the delight of the partisan crowd. “There’s a bit of disbelief — it is my job to capitalise on that now, I gave him a chance… I’ve got to make sure tomorrow no chances,” Labuschagne, who rode his luck more than once, said of Buttler’s costly mistake.

Labuschagne hung on to the close of play, surviving 275 balls to remain unbeaten, while Steve Smith — captaining the team in the absence of Cummins — was 18 not out in front of 32,328 fans. Broad took 1-34 while Anderson bowled a very tidy 18 overs for 29. There was drama before a ball was even bowled. Cummins was at a restaurant on Wednesday evening when a person at the neighbouring table was identified as positive for coronavirus. Cummins returned a negative test but under South Australia state’s strict bio-security rules he must now isolate for seven days. Smith took over the captaincy for the first time since being axed over the “Sandpaper-gate” ball-tampering scandal in 2018. He won the toss and opted to bat.

England controversially left out Anderson and Broad, who had 1,156 Test wickets between them, from their heavy defeat in Brisbane. But they returned at the expense of Mark Wood and spinner Jack Leach, bowling in tandem once more in a fiery opening spell. Their accuracy restricted Australia in an attritional first session to just 45 runs, where Harris fell.

The opener never looked comfortable and after surviving an lbw review then fluffed a pull shot off Broad — who was making his 150th Test appearance –that wicketkeeper Buttler took with a flying catch.

The headband-wearing Broad accounted for Warner seven times on a horror Ashes tour of England in 2019 and he made a massive, but unsuccessful, appeal for lbw on his first ball to the 35-year-old Warner, who was nursing bruised ribs.

With Labuschagne at the other end they picked off runs and accelerated the pace as the day wore on.

Warner reached his 50 and then turned on the style, but as he eyed another Test ton he thrashed at a wide Stokes delivery and sent the ball straight to Broad at cover.

Labuschagne struggled early and was dropped by Buttler for the first time on 21, while Stokes missed a chance when he was on 45. But he made the most of his fortune and will be eyeing a big score Friday.