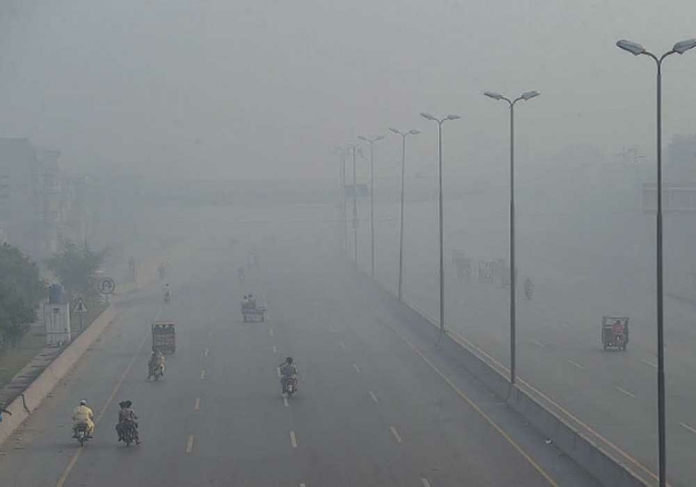 A panic was witnessed among citizens on Tuesday due to a ‘smog-like’ situation that appeared early hours in the upper atmosphere of the provincial capital.

Amid the hazy atmosphere and decrease in temperature, citizens’ panic arose a day after the Punjab Disaster Management Authority (PDMA) admitted that the city’s air quality was touching the hazardous level. “There is strong evidence of persistent deterioration in the air quality index of the city,” the notification stated. However, it avoided mentioning the source for reasons best known to its officials.

Without giving any proof on air quality index, PDMA ordered a ban on smog causing activities; stubble burning, smoke-emitting vehicles, industries without scrubber and other activities might contribute to the smog. Punjab EPA was responsible to release the exact air quality data after measuring the pollution level in the province but it failed to do so for another year.

According to the US Consulate, the air quality index was 217 on Tuesday at Davis Road, recorded on the basis of particulate matter 2.5 (PM2.5) which is far above the permissible level given in the Punjab Environmental Quality Standards (PEQS). The US Consulate released AQI through its air quality monitoring station with a PM2.5 sensor, and can only be considered reliable for the surrounding areas of the building.

Besides the US Consulate, there are many other low-cost air quality monitoring devices installed by citizens in different areas of the city and people can also google the AQI on their smartphones. The data released by such devices also shows high AQI in the city. According to experts, though these devices can show the pollution level at the time of measuring the air quality, their data cannot be taken for issuing the AQI.

Having no authentic equipment to measure the air pollution with it, the Punjab EPA kept on rejecting the air quality data released by private sources. Last year, the agency wrote to the law enforcers to act against those disseminating the ‘fake’ AQI data. Meanwhile, following the footsteps of previous years, a “game of meetings” has been started by different departments to deal with the situation.

Moreover, a meeting was held yesterday in the Environment Protection Department (EPD) secretariat in Lahore where officials from Agriculture, Transport, Local Bodies departments, Lahore Deputy Commissioner were present to “discuss” the matter, chaired by newly appointed EPD secretary Usman Ali Khan. The meeting was convened in compliance with the Lahore High Court’s orders given to the Punjab government on Friday to call an urgent meeting to control the menace of smog. Orders were given by LHC judge Justice Shahid Jamil during the hearing of a petition on smog.

Senior officials from Transport, Agriculture, Industry, Health, Labour, Police, Home, Local Government departments, Suparco and PDMA participated in the meeting. Meeting decided that all the departments concerned will speed up the actions to combat the smog. It was decided that no smoke emitting vehicle will be allowed to enter the provincial capital. The EPD secretary said that the Transport Department will ensure the availability of Euro-V standard compliant fuel at all oil marketing companies outlets.

“Number of Smoke Emitting Vehicle squads will be increased and they will check the commercial vehicles’ VICS certificates at all three entry points of the city including Sagian, Thokar Niaz Baig and Chowk Yateem Khana,” the meeting decided. All concerned departments will also depute their focal persons for date compilation and dissemination in the Smog Control Room established in EPD head office, added the secretary.

He also asked the PITB officials to speed up the work to complete the mobile application for the daily actions reporting, equipped with necessary features to alert Deputy Commissioners about real time- ge0 tagged fire and smoke emissions instances. Anti-smog squads of EPA and District offices will further speed-up their actions and no industrial unit will be allowed to operate if it will not be complying with Punjab Environmental Quality Standards. Besides, industrial units working without any smoke emission control system will be dealt with strictly.

In provincial metropolises, PHA, LWMC, MCL and WASA will ensure water sprinkling on a daily basis wherever necessary especially where roads are under construction. On Tuesday, the Lahore High Court once again ordered authorities to take stern action against the polluters. Justice Shahid Karim ordered the sealing of the smog emitting factories, operating in the nighttime. “Speed up the action against those involved in burning the crops,” he ordered and directed the authorities to inform the Judicial Water Commission regarding the actions against polluters.