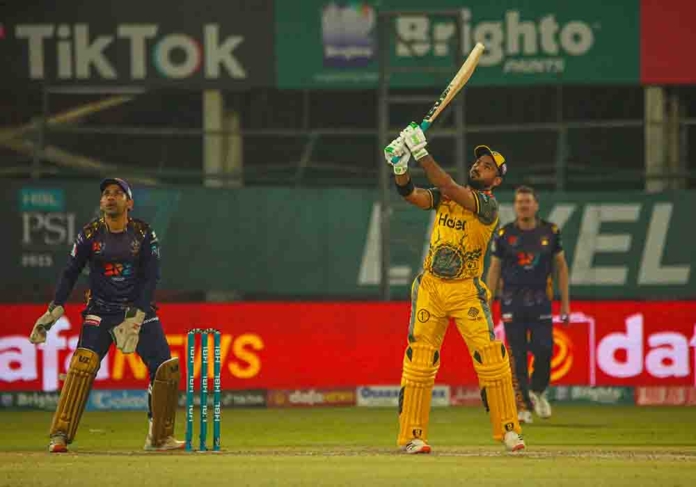 Peshawar Zalmi got off to a blistering start as they beat Quetta Gladiators in the 2nd match of HBL PSL 7 at National Stadium Karachi(NSK).

The 40 year young Shoaib Malik scored an unbeaten 48 off 32 deliveries to see his team to victory over Gladiators. Hussain Talat stood by his skipper’s side and scored an amazing inning of 52 off 29 deliveries.

Peshawar were not able to field their strongest team because of a virus outbreak in the camp. Skipper Wahab Riaz, Kamran Akmal, and Hazratullah Zazai were in isolation after positive COVID-19 results.

After winning the toss, Shoaib Malik, who replaced Wahab Riaz as captain, elected to field first. The decision seemed to be going in the Gladiators favour as they posted a mammoth total of 190 for the loss of four wickets.

But Zalmi’s batters made sure to make the decision look right as they chased the total with 2 balls remaining.

Zalmi’s wickets tumbled early on as Tom Kohler-Cadmore (22), Yasir Khan (30), and Haider Ali (19) went back to the pavilion without significantly threatening the Gladiators.

From there, Shoaib Malik and Hussain Talat made sure that there was no way back for the Gladiators.

Gladiators’ bowlers were unable to impress, with Mohammad Nawaz taking three wickets and James Faulkner and Naseem Shah both taking one wicket.

Earlier, openers William Smeed and Ahsan Ali punished Covid-hit Peshawar Zalmi and helped Quetta Gladiators put up a big score on the board.

The Gladiators cruised along until the 16th over, as neither batter missed an opportunity to punish the Zalmi bowlers, no matter who was thrown their way. The opening pair put up a 151-run opening stand.

Usman Qadir, on the other hand, eventually got to work and took Ahsan Ali’s wicket. Usman went on to dismiss Ben Duckett for a duck in the same over.

The Gladiators were not bothered by the two consecutive blows as Smeed kept on delivering the goods. Quetta saw 2 wickets going down in the final over of the innings, with Iftikhar going back to the pavilion for 8 runs and Smeed being caught while trying to complete his century on the last ball of the innings.