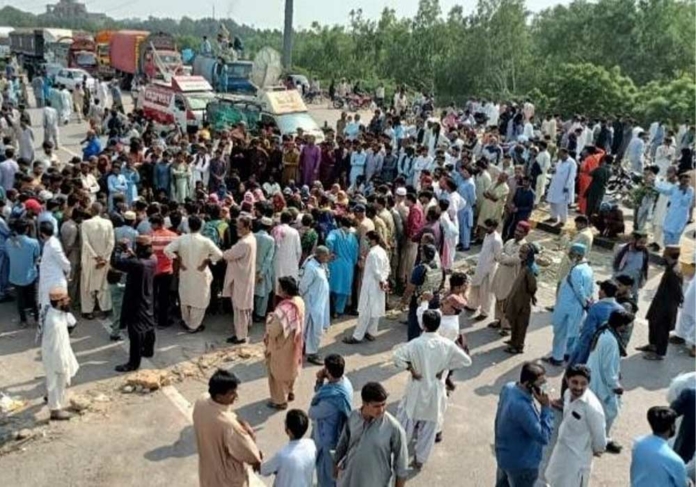 The workers of Sindh United Party, Qaumi Awami Tehreek, lawyers and members of the civil society on Sunday held demonstrators in a number of towns to protest against the lynching of an engineer and his driver by an angry mob in Machhar Colony.

Several hundred people came on the roads in Karachi, Larkana, Sukkur, Hyderabad, Mirpurkhas, Badin, Thatta, Naushahro Feroze, Nawabshah, Khairpur, Dadu, Jamshoro and other cities and towns of the province to register their protest against the shocking incident. They demanded the arrest of all those involved, especially the prayer leader who had incited the area people by using the loudspeakers of a mosque. Condemning the incident, the lawyers of Hyderabad Bar Council unanimously passed a resolution, demanding the chief justices of both Supreme Court of Pakistan and Sindh High Court take notice of the incident and order police officials to arrest all the miscreants who burnt alive the two innocent men.

Javed Alam Odho, the AIG and chief of Karachi Police taking to the media said police teams arrested four more suspects on Sunday involved in the lynching of two telecommunication workers in Machhar Colony. The more arrests came after the police raided a site in the forest area near Machhar Colony. The workers of a private telecommunication company were beaten to death after being pelted with stones and hit with heavy objects on Friday after they were assumed as child kidnappers. The suspect held by the police could be seen beating two telecommunication workers in the video that made rounds on social media. The police said heavy exchange of fire between the police and suspects also took place during the raid. Fida Janwari, SSP Kemari, said, “The armed suspects opened fire on the police during the search operation.” He added that in the crossfire, one of the suspects was struck by a bullet and the police arrested him in injured condition. SSP said the one of the prime suspects was identified as Mohammad Sharif alias Sharfu. The search for other suspects visible in the gruesome video was underway.