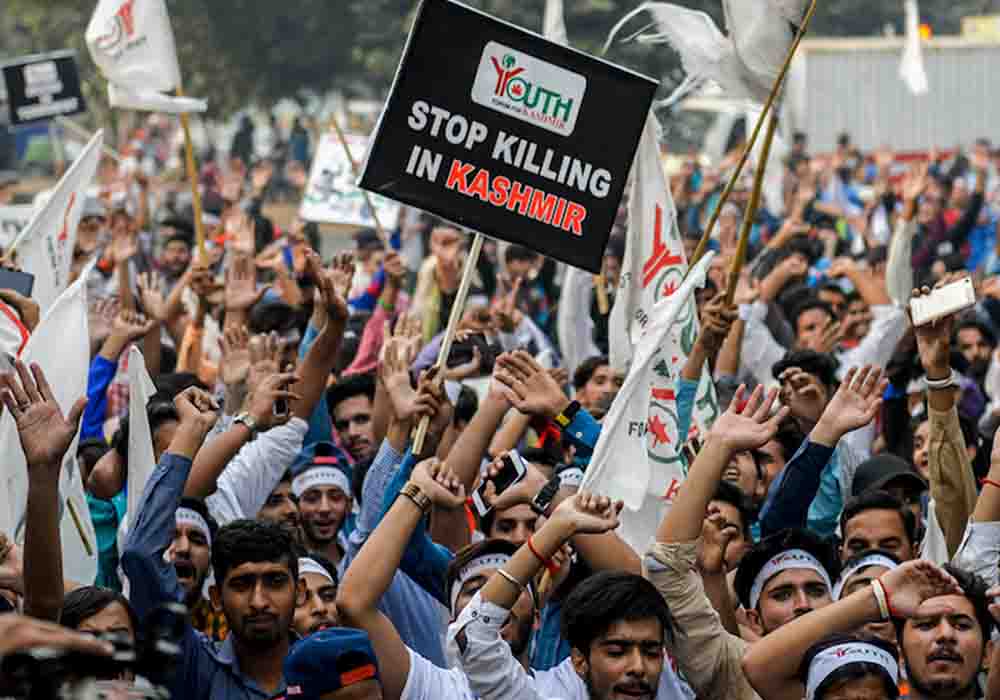 Pakistan on Saturday strongly condemned the extra-judicial killing of four more Kashmiris by Indian occupation forces in Srinagar and Kupwara in the Indian Illegally Occupied Jammu and Kashmir (IIOJK).

The military crackdown and intensified extra-judicial killings in fake stage-managed operations in IIOJK reflect the extremist anti-Muslim designs of the Hindutva inspired extremist BJP-RSS nexus in India, he added. He said the burial of the last remains of martyrs at unknown locations without the consent and presence of their families in many instances, was yet another abhorrent manifestation of India’s use of state terrorism as a policy tool to suppress the just Kashmiri struggle for their inalienable right to self-determination.

He said Pakistan called on the international community to take immediate notice of India’s relentless oppression in IIOJK. “India’s ongoing, systematic and widespread human rights violations in IIOJK warrant investigation by UN Commission of Inquiry (COI), as recommended by the Office of the United Nations High Commissioner for Human Rights (OHCHR) in its Kashmir reports of 2018 and 2019,” he said.

“Pakistan also urges the international community to play its role for a just and peaceful resolution of the Jammu and Kashmir dispute in accordance with the relevant UNSC resolutions and wishes of the Kashmiri people for durable peace and stability in the region,” he added. Over in Muzaffarabad, representatives of different Kashmiri organisations have announced to observe the first week of New Year as a right to self-determination week.

It was decided in a meeting organised under the aegis of Pasban-e-Hurriyat Jammu and Kashmir on Saturday.

The meeting revealed that rallies will be held across Azad Kashmir, demanding implementation of the United Nations resolutions on the right to self-determination passed on January 5, 1949, to resolve the Kashmir issue.

Speakers reiterated that it is the constitutional obligation of the United Nations regarding the implementation of its resolutions, particularly on the Kashmir issue.

Meanwhile, the All Parties Hurriyat Conference (APHC) leaders Farida Bahenji and Yasmeen Raja have expressed serious concern over the surge in Indian state terrorism in the occupied territory.

In a joint statement, they described the prevailing situation in the occupied territory as extremely grim with regard to the protection of civilians, Kashmir Media Service reported.
The APHC leaders said that the fascist Narendra Modi government was victimising the people of IIOJK for demanding their right to self-determination.

Separately, National Conference Vice-President Omar Abdullah has mocked the authorities in IIOJK for illegally locking People’s Alliance for Gupkar Declaration (PAGD) leaders in their homes ahead of a peaceful protest against the recommendations of the Delimitation Commission in Srinagar.

In a tweet, Omar Abdullah said, “Good morning and welcome to 2022. A new year with the same police illegally locking people in their homes and an administration so terrified of normal democratic activity,” KMS reported.

He said that trucks have been parked outside the gates of the homes of PAGD leaders to scuttle the peaceful protest of PAGD sit-in protest.

Abdullah, whose father and veteran politician Farooq Abdullah heads the PAGD, claimed, “Talk about a lawless police state, the police have even locked the internal gate connecting my father’s home to my sister’s. Yet our leaders have the cheek to tell the world that India is the largest democracy.”

Peoples Democratic Party President Mehbooba Mufti also tweeted that she had been placed under detention. “A truck is parked outside my house too,” she said in a tweet. It merits mentioning here that Indian troops, in their unabated acts of state terrorism, martyred 210 innocent Kashmiris — including five women and five young boys — during the year 2021 in occupied Kashmir.

According to a report released by the research section of KMS, 65 of the martyrs were killed in fake encounters and custody. The icon
of the Kashmir resistance movement, Syed Ali Gilani, died also died during his continued house arrest.