President Alvi stresses army should not be made ‘controversial’ 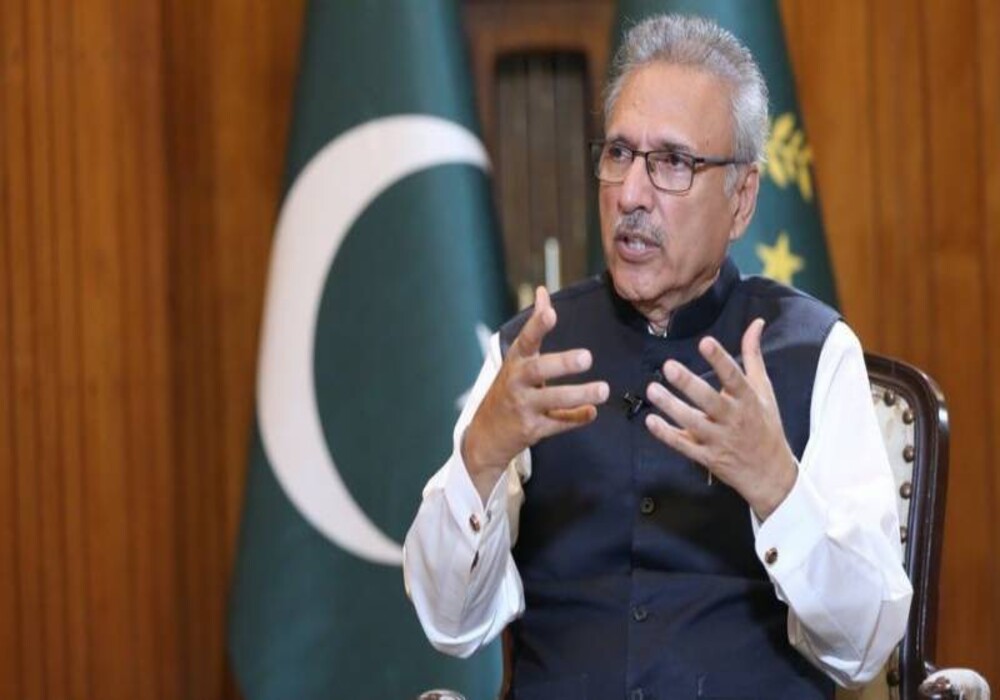 President Arif Alvi has emphasised that armed forces should not be made “controversial”, just days following statements of such nature by Pakistan Tehreek-e-Insaf (PTI) leader Shahbaz Gill.

While talking to journalists in Governor’s House, Lahore, he stated that he had repeatedly told politicians to not bring the military under discussion.

President Alvi said that armed forces had the responsibility of the country’s security, and considering this role, politicians should avoid making the institution controversial.

The president’s statements come after the chief of staff of PTI chairman, Shahbaz Gill, was arrested on Tuesday following remarks deemed ‘seditious’ on a private TV channel.

Gill has been charged with attempt to incite hatred within the Pakistan Army.

Alvi stated that as president of the country, all institutions of the country were respectable and dear to him and he did not believe in generating any controversy, however, there were many avenues where improvement could be made through a consultative process.

While referring to the appointment of the chief of army staff and the judges, he said that the chief justice of the apex court had said that appointment should be standardized, and that he [Alvi] agreed with him.

President Alvi stated that under laws of the United States, a party had to establish a company if it intended to receive funding from abroad.

He stated that it had been noted in the verdict by the Election Commission of Pakistan that a ‘company’ had sent PTI funds, when those companies had been created in accordance with US and Canadian laws.

The president further said that he was worried about the prevailing polarisation and that it had to end.

Moreover, President Alvi said that the situation in the country was not “ideal” and that it was important for politicians to come together.

The president said there was a need to initiate a consultative process to bring all important stakeholders together. However, the constitutional role of the president did not allow him officially to reach out to the stakeholders.

Regarding the increasing polarization, he said that it was the primary responsibility of the executive and the opposition in the parliament and outside it along with relevant institutions to deliberate on how to ‘defuse the polarization’.

President Alvi further said that he believed that corruption was a major factor in the backwardness of any country.

He added that one of the best ways to counter corruption was to make all financial transactions through formal banking channels, especially by the political parties while receiving and managing donations.

Replying to a question, he said stakeholders within Pakistan should be involved in resolving issues without any foreign involvement.

The president also spoke about social media and said that it was here to stay, adding that we were not used to it and it was difficult to control. He stated that efforts should be made to deal with fake news and hearsay.

He further said he had a very cordial relationship with the existing government and he accorded timely approval to all the summaries except four summaries which were delayed while remaining within the ambit of the constitution.

President Alvi said that he was the main proponent of electronic voting machines (EVMs), even during the governments of the Pakistan People’s Party and the Pakistan Muslim League-Nawaz.

He emphasized the need for consensus on the use of the technology during the election process which, he said, would strengthen the democratic process in the country.

While replying to a question, he said that through Mufti Taqi Usmani, [Pakistan] had offered the Afghan government to provide distance learning and virtual mode of education to Afghan students, especially female students. He said Mufti Taqi Usmani, during his talks with Pakistani Taliban, told them that out of all constitutions of the Muslim world, the closest constitution to Islam was the Constitution of the Islamic Republic of Pakistan.

While commenting upon the recent reports of Taliban’s arrival in certain parts of the country, he said that he did not have any opinion on it, as according to reports the negotiations were underway. He said that he was of the opinion that any such negotiations should be mandated by the parliament and may be pursued in confidence to reach some amicable outcome. The result should be reported back to the parliament before making them public, he added.