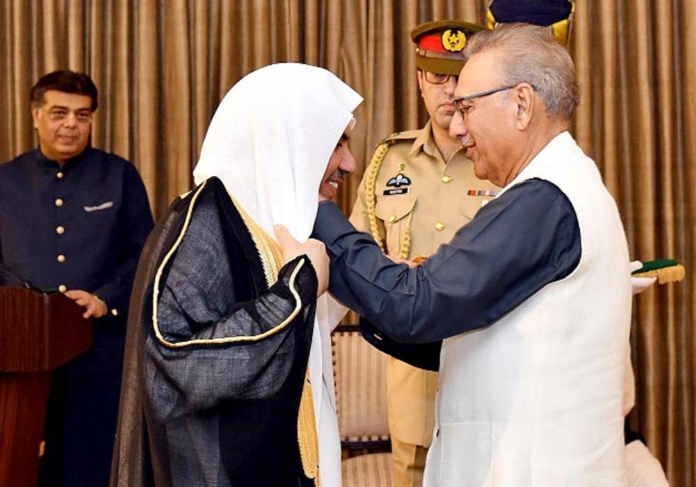 The award was conferred in recognition of his services in strengthening the brotherly relations between Pakistan and Saudi Arabia; for being an instrument for the award of scholarships to Pakistani students in educational institutions and higher learning in Saudi Arabia; for pursuing and safeguarding the rights of Pakistani expatriates in Saudi Arabia; for promoting peace and harmony by holding conferences, seminars and dialogues within the Muslim societies and also with rest of the world with the objective to create harmony and unity in the Islamic world; and showcasing a peaceful harmonious and tolerant picture of Muslims in the world.

Later, Dr Muhammad bin Abdul Karim Al-Issa and his delegation called upon the president. Minister for Religious Affairs & Interfaith Harmony, Mufti Abdul Shakoor, Ambassador of the Kingdom of Saudi Arabia Nawaf bin Saeed Al Malki also attended the meeting, President Secretariat Press Wing said in a press release. Talking to the secretary-general, the president termed “Islamophobia” one of the biggest challenges being faced by Muslims, and urged the need to allay the fears of the world regarding Islam. He said that Islam advocated for peace, solidarity and harmony among the people of the world, and people from different nations needed to be educated about the true message of Islam.

The president urged the need to highlight the true and harmonious nature of Islam in the Muslim world and beyond. He said that Islamophobia needed to be countered and eliminated through peaceful and harmonious actions in the Islamic world. He also underlined the need to hold inter-faith conferences, dialogues and meetings to exchange ideas with religious scholars and leaders of other religions to explain the real message of Islam.

The president said that moderation in Islamic societies could go a long way in not only eradicating extremism, terrorism and intolerance but would also ensure the promotion of peace and socio-economic justice. He also expressed his concern over the increasing trend of Islamophobia in India, adding that Islamophobia in India was deep-rooted and being patronized at the state level. He urged the need for taking concrete actions to provide relief to the Muslims of India from the negative impacts of Islamophobia.

During the meeting, the president urged the Muslim World League to consider initiating scholarships for students of Shariah, Islamic Studies as well as the scientific and technical disciplines. He also emphasised the need for an exchange programme for the government officials to study governance, particularly the regulation of religious affairs. The president appreciated the Muslim World League’s efforts for the cause of Islam and the welfare of the Muslim World and commended its work in setting up vocational educations and training centres, provision of water, and renovation and construction of mosques and religious institutions.

The president also appreciated the implementation of his idea communicated to the ambassador of Saudi Arabia in Pakistan to set up an Islamic Museum in Pakistan. He said that after the completion of this museum, the people of Pakistan and the rest of the world would benefit from the exhibits and would be able to learn about the different aspects and phases of the life of the Holy Prophet (PBUH).

The president thanked the Kingdom of Saudi Arabia for providing valuable support to Pakistan to help overcome its most pressing financial needs and for providing generous help to alleviate the sufferings of the flood victims. During the meeting, Dr Muhammad Bin Abdul Karim Al-Issa appreciated Pakistan’s efforts in raising its voice against Islamophobia at all world forums, including the United Nations, which had declared 15th March as the “International Day against Islamophobia”.

He said that Pakistani scholars and civil society were deeply concerned with the increasing trend of Islamophobia and were playing an active and effective role to showcase the peaceful and true face of Pakistan to the rest of the world. He also appreciated the president’s address to the two-day International Seerat-un-Nabi (PBUH) conference titled “Morality of Society, Reformation and Development: In the Light of Seerat-un-Nabi (PBUH)” organized by the Ministry of Religious Affairs and Inter-Faith Harmony, in Islamabad.