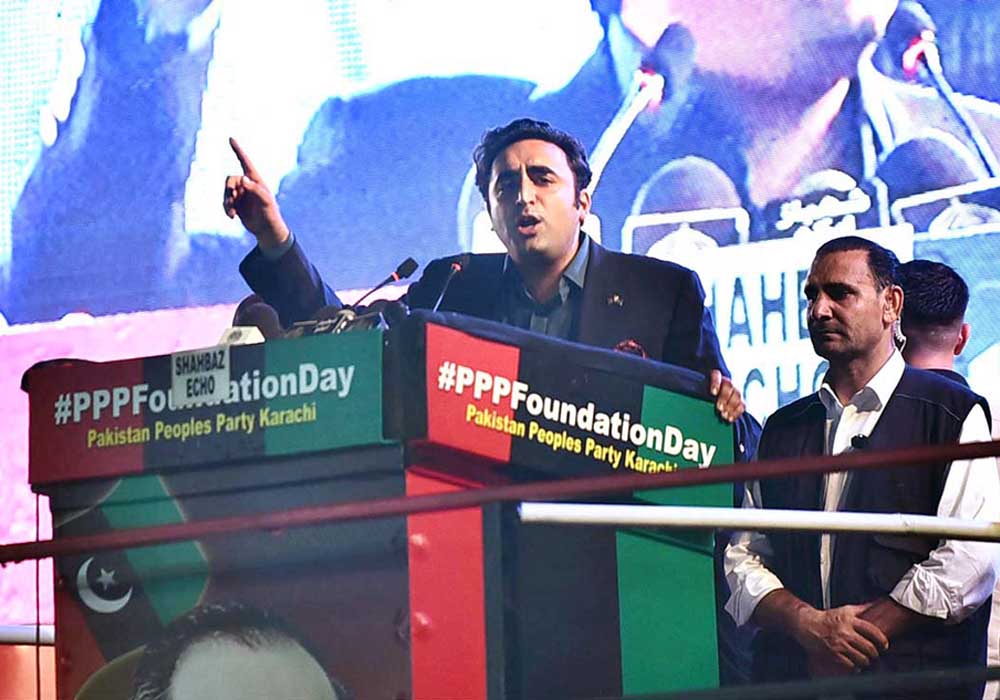 “The institution has accepted its mistake. But now, they [‘puppet politicians’] are worried that if the institution has become neutral, then what will become of their politics,” Bilawal told a charged crowd in Karachi during his address at a ceremony held to mark PPP’s 55th foundation day.

Bilawal, who also holds the portfolio of foreign minister, vowed to thwart anti-democratic forces, saying that the party will continue fight against the “enemies” of democracy.

Bilawal said when the PTI was enjoying “support”, the party defeated PPP in its stronghold of Lyari and “stole” the mandate of the people. But he did not mention whom he was referring to.

The PPP chairman claimed that PTI lawmakers would not quit Khyber Pakhtunkhwa and Punjab assemblies. “If you want to resign, then go ahead. The PPP is ready to face you… PPP is not afraid of ‘puppets’ and ‘selected actors’,” Bilawal said.

Bilawal said that Imran Khan was “lying” about quitting assemblies as “he is notorious for going back on his words”.

“Don’t you remember”, he told the crowd, “that after the PTI resigned from the National Assembly and the by-polls were set to take place, they moved the courts and pleaded that their resignations were just a political stunt”.

The PTI chief – who called off his long march to Islamabad last week – announced quitting assemblies across the country, saying he could not be part of a “corrupt system” anymore.

Taking a jibe at Khan for cutting his long march short, Bilawal said: “He fled from Pindi. The coward beat a hasty retreat just like he did at the time of no-confidence motion.”

At the outset of his address, Bilawal thanked the people of Karachi for coming out in large numbers as the party had decided to hold the founding day at different districts instead of a central one due to floods.

Bilawal paid glaring tributes to his mother, former prime minister Benazir Bhutto and his maternal grandfather, ex-premier Zulfiqar Ali Bhutto, for their services to the country.

He added that a “jiyala” (diehard worker) would be elected Karachi’s mayor when the local body elections – scheduled for in January 2023 – take place.

“A jiyala sitting here in this crowd will become the next mayor,” he said, stressing that the PPP does not promote politics of hatred and anarchy.