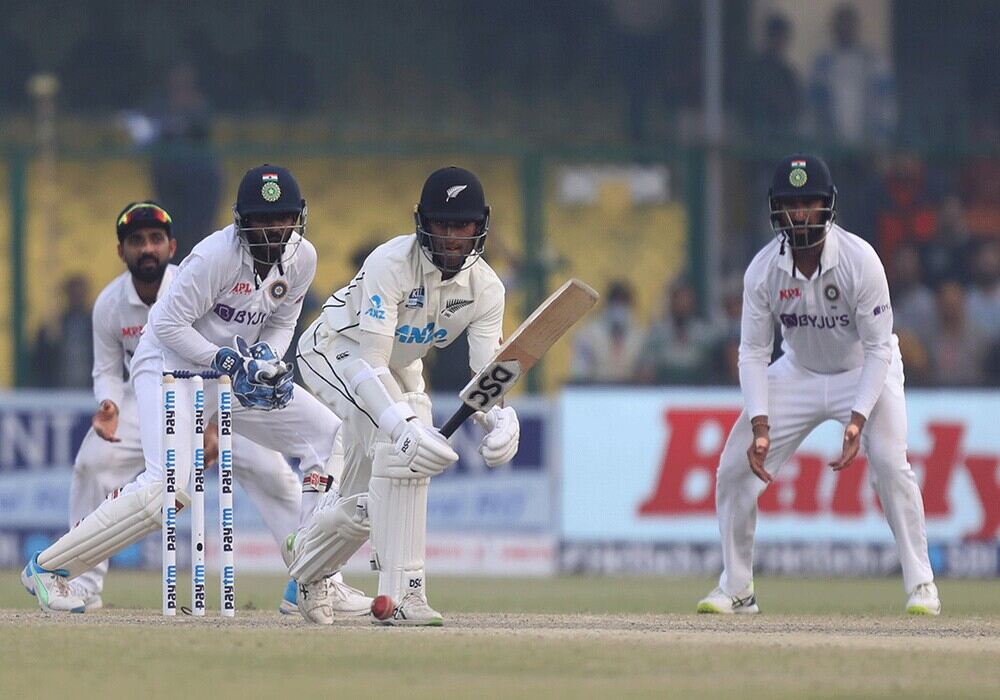 Debutant Rachin Ravindra worked with New Zealand’s lower order to pull off a dramatic draw against India after they ended day five on 165-9 while chasing 284 in the first Test on Monday.

New Zealand faltered after overnight batsman Tom Latham, who made 52, and later Kane Williamson, who made 24, departed, but still denied India a win after a tense final session in Kanpur. Left-handed Ravindra (18) put on key partnerships including an eighth-wicket stand of 46 deliveries with Kyle Jamieson, and then held fort for 52 balls with Ajaz Patel before umpires ended play due to bad light. Ravindra Jadeja and Ravichandran Ashwin shared seven wickets between them to hurt New Zealand in their chase but the 22-year-old Ravindra, who went wicketless with his left-arm spin, made the match his own.

The Kiwis slipped to 138-7 in the 79th over when Ravindra brought back the fight, with Jamieson for company. The left-handed Latham and nightwatchman William Somerville denied India a wicket in the first session as the two put on 76 runs for the second wicket.

Somerville, who joined Latham after Will Young fell to Ashwin in the final session on Sunday, scored 36 off 110 balls but departed soon after lunch off fast bowler Umesh Yadav.

Latham, who made 95 in New Zealand’s first innings total of 296, moved from his overnight two to another half-century but fell to Ashwin’s off spin. The wicket took Ashwin past veteran Indian spinner Harbhajan Singh’s tally of 417 wickets. Former spinner Anil Kumble leads the Indian wicket-takers list with 619, followed by Kapil Dev with 434.

Jadeja struck at the stroke of tea to send back Ross Taylor for two and got Williamson’s prized scalp for 24. Debutant Shreyas Iyer stood out for India with his 105 and 65 in India’s 345 and 237-4 declared.