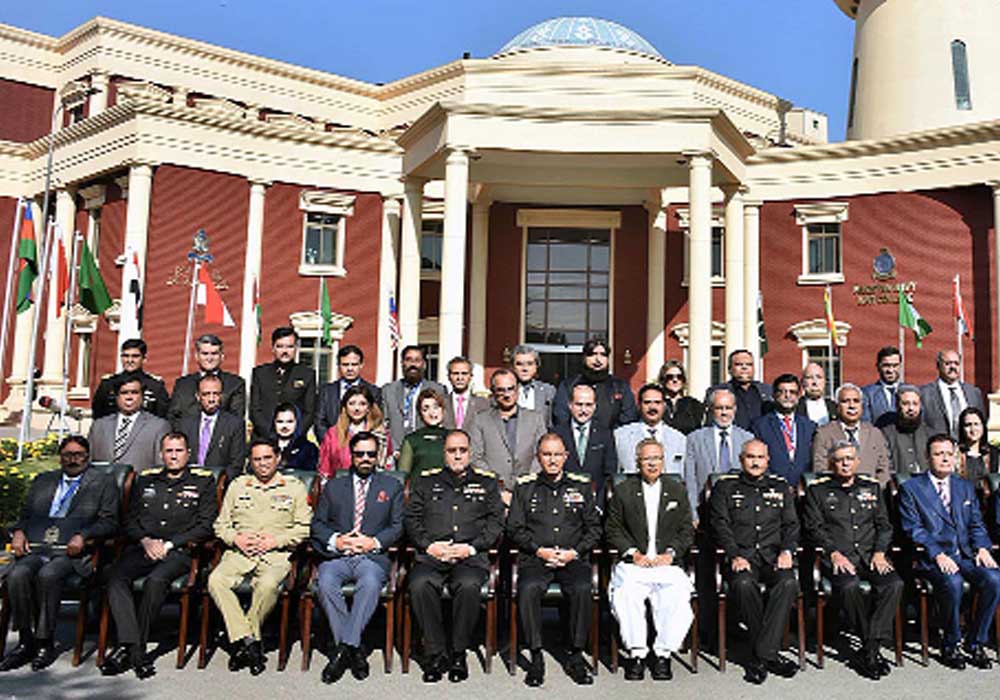 President Dr Arif Alvi has said that Pakistan Navy is playing a commendable role in safeguarding and protecting Pakistan’s naval and maritime interests, despite resource constraints in a challenging maritime security paradigm and overall security situation.

He appreciated Pakistan Navy’s role for the flood victims during the recent global climate induced super floods, providing them with medical services and relief supplies. The president expressed these views while addressing the closing ceremony of the 5th Maritime Security Workshop 2022 (MARSEW-5), held at Pakistan Navy War College, Lahore. President Alvi was the chief guest at the ceremony. Chief of the Naval Staff, Admiral Muhammad Amjad Khan Niazi, was also present. The closing ceremony was attended by civil and military officials.

Speaking at the ceremony, the president said that regional countries, including Pakistan were facing challenges due to changing regional and global situation, new alliances were in the making, and readjustment of priorities and preferences in multiple domains including in the maritime domain, which necessitated the country to remain alert and adjust itself in the emerging situation with dignity, honour and preserving its sovereignty in decision making.

The president underlined the need to enhance the pace of decision-making, taking right and timely decisions and their implementation on timeline basis to remain abreast with the rest of the world in all sectors including the global maritime security environment to fully harness potential of Pakistan’s human, natural and maritime resources.

The president highlighted that the strong economy was a must for gaining regional and international recognition and maintaining a balance to move forward with dignity and respect in the international relations. Therefore, he added, it was imperative to explore new avenues to raise country’s productivity in all sectors including developing quality and producing human resources, upscaling our business, trade, investment, industrialization and empowering the work processes with digitalization and infusing of artificial intelligence, investing in quantum computer research and development to sustain reasonable economic outlook and to improve it on perpetual basis.

He added that Pakistan was short of time. It needs to take tangible steps in all matters of the state. The Parliament needs to spend time and energy in making laws to bring reforms and to create ease for accelerated development and progress, he said. The government needs to take right decisions at the right time and bureaucracy should implement the decisions with well-thought-out KPIs and following a definite timeline which, he said, would help the country in overcoming its financial and economic difficulties and leading the country towards progress and prosperity. “We should promote and encourage a system which has no space for corruption and corrupt practices; it is efficient, effective and productive and capable of moving and aligning itself with the fast moving and rapidly progressing world,” he said.

The president said that although Pakistan was the 5th largest country in terms of population, this huge human resource was not being fully utilised, as over 20 million children were out of school, women are not part of the productive economic cycle due to cultural and social taboos, and enrollment rate in the higher education was only 9% compared to 23% in the neighbouring countries. He stressed enhancing the number of skilled graduates and training human resources to fully develop Pakistan’s maritime sector and develop it to its fullest potential.

The president highlighted the need to adopt sustainable fishing and maritime practices to safeguard Pakistan’s precious marine resources, including fish, marine flora and fauna and ecosystem. He called for using eco-friendly boats, internationally approved fishing nets and best practices and bringing in technology and expertise to catch, preserve and export marine products by maintaining internationally accepted standards and processes and promoting and encouraging sea route linkages with the rest of the world for promoting trade business.

He said that unfortunately the country could not fully exploit the sea resources with prudence as a result it had far less exports compared to other countries with similar maritime resources and coastline. The president also underscored the need to implement the United Nations resolutions, especially on the Jammu and Kashmir dispute for peace and stability in the Indian Ocean region. He added that India’s belligerence and self-professed role as the aspiring hegemon in the region could create instability in the region.

The theme for this year’s maritime security workshop was “Secure Seas-Prosperous Pakistan”, and the workshop was conducted in two phases. In the first phase, academic discourse on security dynamics in Indian Ocean region, challenges and opportunities in Pakistan maritime sector, Blue Economy and its contributions toward Pakistan economic prosperity, development of Gwadar Port within CPEC were discussed.