Tragedy on Multan-Sukkur Motorway as bus and tanker collide 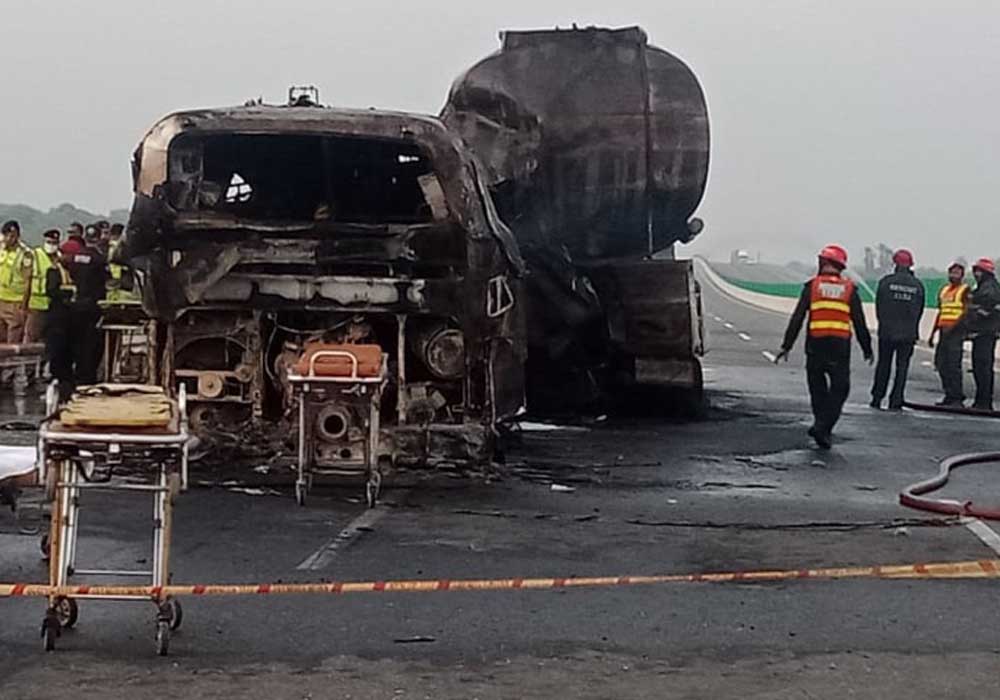 An early-morning collision between a passenger bus and an oil tanker on the Multan-Sukkur Motorway (M-5) resulted in at least 20 fatalities and six people getting injured.

According to a statement from Multan Deputy Commissioner Tahir Wattoo, the passenger bus, which was going from Lahore to Karachi, struck the oil tanker at the Jalalpur Peerwala interchange on the highway from behind.

Following the accident, a fire broke out, and 20 individuals died on the spot.

Multan Commissioner Amir Khattak also tweeted to confirm the development. He stated that the incident had happened at 4:00am. However, according to a statement from Rescue 1122’s provincial monitoring centre in Lahore, the accident happened around 2:20am in the morning.

Deputy Commissioner Wattoo stated that DNA testing was being done in order to identify the dead.

According to a spokesperson for the motorway police, the tanker was transporting thousands of litres of petrol.

He mentioned that the cause of the accident could be because the bus driver fell asleep.

Prime Minister Shehbaz Sharif expressed sorrow over the event and offered prayers for the departed and their families.

Prime Minister Tweeted, “I am saddened by the loss of 20 precious lives in the accident. My prayers are with the bereaved families.”

Punjab Chief Minister Parvez Elahi asked the Multan commissioner to submit a report on this tragic incident. In a statement released by the Chief Minister’s Office, he was quoted as adding that all facets of the tragedy should be looked into, and those responsible should be found.