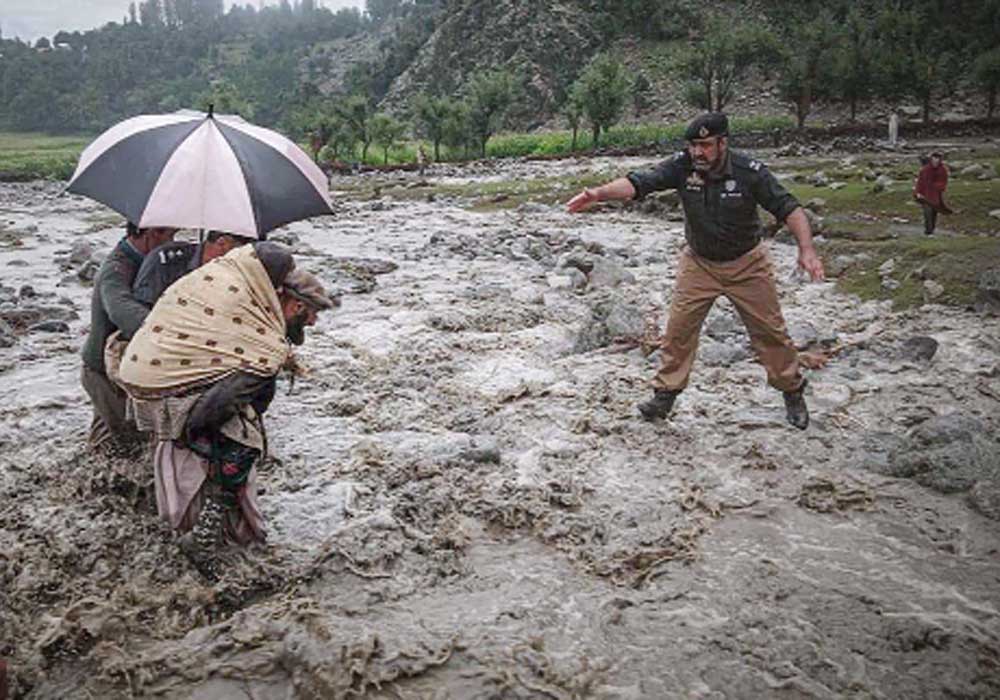 The adverse weather conditions have unfolded a catastrophic situation where floods have created an unprecedented havoc. As reported in media, around 33 million people across Pakistan have been affected as of August 25, 2022. Pakistan has experienced 375.4 millimeters of rainfall which is 287% higher than the national 30-year average of 130.8 millimeters. This challenging weather situation has led to significant human and livestock casualties and also widespread damage to infrastructure is reported.

Statistics published by Humanitarian Advisory Team of United Nations for the Coordination of Humanitarian Affairs (OCHA) provide worrisome/disturbing details. The online report, Pakistan: 2022 Monsoon Floods – Situation Report No. 03: As of 26 August 2022, released by OCHA shows that 937 people have lost their lives, two million acres of crops are impacted and around 794,000 of livestock is lost. The damaged infrastructure includes over thousands of kilometers of roads and hundreds of bridges, thus limiting possibility for people to move towards safer areas or even access basic healthcare and staple facilities. As per the data available, dam reservoirs are rapidly filling up. Tarbela Dam has already reached its maximum conservation level of 1550 feet while Chashma Barrage is only seven feet (2.13 meters) below its maximum level of 649 feet, creating further risk to people within its vicinity and habitancy downstream. About 66 districts are officially declared to be ‘calamity hit’ by the federal government — 31 in Balochistan, 23 in Sindh, nine in Khyber Pakhtunkhwa and three in Punjab.

As an immediate measure the federal government has earmarked Rs35 billion to aid flood-affected people under Benazir Income Support Programme (BISP). Initially 1.5 million families will be receiving Rs25,000 as immediate cash relief. The government has further announced Rs one million compensation to the next of kin of people who lost their lives and Rs250,000 for the injured. Pakistan has also made an SOS call to international community and humanitarian agencies to extend a helping hand. Recently Prime Minister Shehbaz Sharif reached out to Islamabad-based ambassadors and high commissioners to apprise them of the nature/severity of the challenge and the need for help.

At a time when people have lost their dear ones and all their belongings and will have to rebuild their lives, the donors, friendly countries and international financial institutions are responding to the scale of flood calamity. However, it is unfortunate to note that the local political landscape continues to be fragmented depicting a sorry state of affairs; lack of much-needed national cohesion. Unfortunately all political parties are still engaged in pursuing their vested interests.

The government of Punjab, the biggest province of the country with population of over 120 million is hardly visible in these challenging times even in affected areas within its geographical boundaries. While the southern belt of Punjab is facing unprecedented human tragedy due to devastating floods, the incumbent Chief Minister is busy in constituting politically-motivated cases against his opponents. Political leadership of Khyber Pakhtunkhwa (KP) has also demonstrated little regard for the suffering inhabitants living under open skies in areas virtually inundated by floods. The chief minister, along with his cabinet, is shamelessly busy arranging political gatherings for their party head during this tragedy.

The prevailing situation calls for national cohesion and coordination where each and every organ of the state should work for rehabilitation and recovery of the affected. However, the leading political party Pakistan Tehreek-e- Insaf (PTI) has preferred to put a dagger in the heart of a weak and ailing economy by backtracking from its written commitment vis-à-vis provincial surplus agreed with the federal government.

The written procedural commitment, which is a critical part of the deal with International Monetary Fund (IMF), was earlier given by KP government in unequivocal terms. The contrary view of KP’s Finance Minister holds some grounds, but the timing to discuss and raise the same is certainly not appropriate. The IMF deal at this point of time is at a critical juncture and any delay or further suspension can trigger a new wave of challenges for Pakistan.

It is a perfect example of a situation where personal objectives and/or inflated egos of men in big offices overshadow national interests. This seems to be a mala fide attempt to jeopardise IMF deal so that it can put the current government under pressure — a new low in our political history.

After governing in KP for close to a decade and being in federal government for almost four years, PTI should have shown some maturity. The provincial finance minister chose to write a letter to the federal finance minister, who took office only four months back, asking for resolution of long outstanding issues with the federal government — it apparently is tantamount to refusal to implement the IMF’s loan requirement related to the primary budget surplus. It is unfortunate that all along this period PTI never bothered to settle these issues. The letter to Miftah Ismail by Taimur Khan Jhagra is a classic example of incompetence. During these years PTI could not bring the province to a level where it could generate a surplus budget. Rather the provincial government has shown its inability to pay salaries to employees. Since assuming power in April 2022, Miftah Ismail has been constantly trying to clean the fiscal mess and saving the country from possible default. The letter at this time — IMF’s Board is meeting today to consider disbursement request of Pakistan — is an unwise move of jeopardising the revival of much-desired IMF’s Extended Fund Facility (EFF) programme.

The provincial finance minister must spare some time to re-read his oath, which requires him to discharge his duties, and perform his functions, honestly, to the best of his ability and faithfully in accordance with the Constitution of the Islamic Republic of Pakistan. His oath further demands that he always works in the interest of the sovereignty, integrity, solidarity, well-being and prosperity of Pakistan. However, it seems that his political affiliation is unduly influencing his official conduct that is in sheer contrast to what the oath requires.

As Pakistan is going through an extremely tough time of its 75-year existence, especially when millions are displaced and thousands have lost their lives, the situation requires unity to deal with the growing challenges. The prevalent divide is bound to harm the already struggling economy — it will certainly create unrest and destabilise the country.

PTI is ruling two-thirds of the country and cannot absolve itself from its responsibilities, therefore, the party leadership as well as the federal government should sit together and chalk out a strategy to address the issues of rehabilitation of flood affected people within limited resources. They should work together to mobilise revenue instead of blocking the already agreed deals for their political advantages. Needless to say that any such effort in the current situation can lead to existential threat.

The recent publication, coauthored by these writers with Huzaima Bukhari, is: