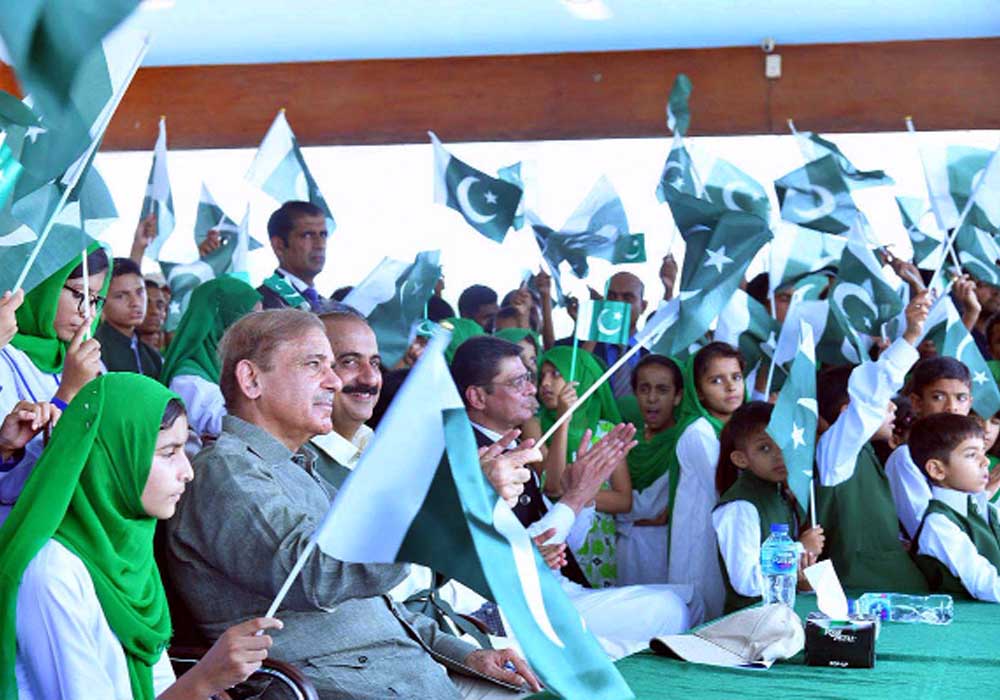 Prime Minister Muhammad Shehbaz Sharif on Sunday stressed the need for holding a national dialogue and developing consensus on charter of economy by all the stakeholders to transform Pakistan into an economic power.

Addressing a national flag-hoisting and unveiling of re-recording ceremony of the national anthem at the Jinnah Convention Centre, the premier said that like their forefathers, on the 75th Independence Day, they vowed to transform Pakistan into an economic power. “If we can become a nuclear power, we can also become an economic power, but for it we have to strive day and night and prove to the world that we are no less than anyone in the world,” he added.

The ceremony was attended by federal ministers, parliamentarians, senior military and law enforcement agencies’ leadership and people belonging to all walks of live.

The prime minister recalled that when Allama Iqbal dreamt about a separate motherland, a sense of pessimism was created, that it was not feasible. “We salute the founding fathers of Pakistan who had smashed such a sense of pessimism and due to their historic struggle, we are now breathing in an independence and sovereign country,” he added.

The premier said that for decades, the Muslims of the Subcontinent faced foreign subjugation, laid down their lives, gave immense sacrifices and made a historic migration, losing their near and dear ones in that perilous journey, to achieve a separate country.

They handed over an ideological country, he said, and paid tribute to all those that lost their lives in the Independence Movement.

“The mission [now] is to give practical shape to those ideals which were reflected in March 23rd [1940] Resolution,” he added.

He said that on its independence, Pakistan was deprived of its due shares, but despite all those odds it made excellent progress in different fields, becoming the 7th nuclear power of the world and first of the Islamic world.

The prime minister said Pakistan had been playing a key role in the UN peacekeeping missions, while its players had raised the national flag in different games. “It is a fact that we have made progress in different arenas, but the speed which with we have to achieve that mission… there were shortfalls which should be overcome,” he stressed. The prime minister resolved that for making Pakistan an ideal nation state as dreamt about by the founding fathers, they would be ready to shed the last drop their blood, foil enemies’ designs with the support of the brave armed forces and harness the true potential of youth to lead the future way.

Later, in a series of tweets, Shehbaz said that the time has come for the country to know what real freedom really means. “It is a freedom from want, hunger & poverty. Without economic sovereignty, our freedom is incomplete. Our greatest strength is our people. It is about time we place their welfare at the center of public policy.”

The nation celebrated Diamond Jubilee of the motherland with a renewed pledge to make the country a true Islamic welfare state.

The day dawned with 31-gun salute in the federal capital and 21-gun salute in the provincial headquarters. Prayers were offered for security and progress of Pakistan and well-being of the people. The national flag was hoisted at all important public and private buildings.

Moreover, streets, bazaars and markets were profusely illuminated. National flags, buntings, portraits of the founding fathers, posters and banners were also seen everywhere as part of the Independence Day celebrations. A change-of-guard ceremony was held at the Quaid’s Mausoleum in Karachi in the morning. The cadets of Pakistan Naval Academy assumed the guards duties.

Kashmiris on both sides of the Line of Control, as well as those living across the globe, also marked the 75th Independence Day of Pakistan with great zeal, zest, fervor and enthusiasm.

Meanwhile, Prime Minister Muhammad Shehbaz Sharif stressed that public welfare projects should be completed at the earlier to give benefit to the masses and ensure national progress and prosperity.

Addressing the inauguration ceremony of Rawal Chowk Flyover, the premier said the project had hit snags in the past and was moving at a snail’s pace, but in the last few months, work was expedited.

He said all the public projects should be given a spur, and lauded the CDA chairman and FWO DG for their hard work, adding that addition of 20 new metro buses was a good step, which should have been taken earlier. He also appreciated the CDA chairman’s plans of launching inter-city transport within a few months.

The ceremony was attended by the federal ministers, parliamentarians and relevant authorities. Referring to the Bhara Kahu Bypass, the prime minister emphasised that the project should be completed in four months.

He said that with collective efforts, they could change the fate of the country.

Also, Shehbaz said the government was determined to provide facilities to the children of Pakistan Sweet Homes.

During his visit to a sweet home, the premier announced a gift of buses for the institute.

He also acknowledged the contributions of Patron in Chief of Pakistan Sweet Homes, Zamurd Khan, his associates and teachers for the training and education imparted to the children.

He said the entire nation was celebrating 75th Independence Day and he was pleased to share joys with the children of the sweet home on this occasion.