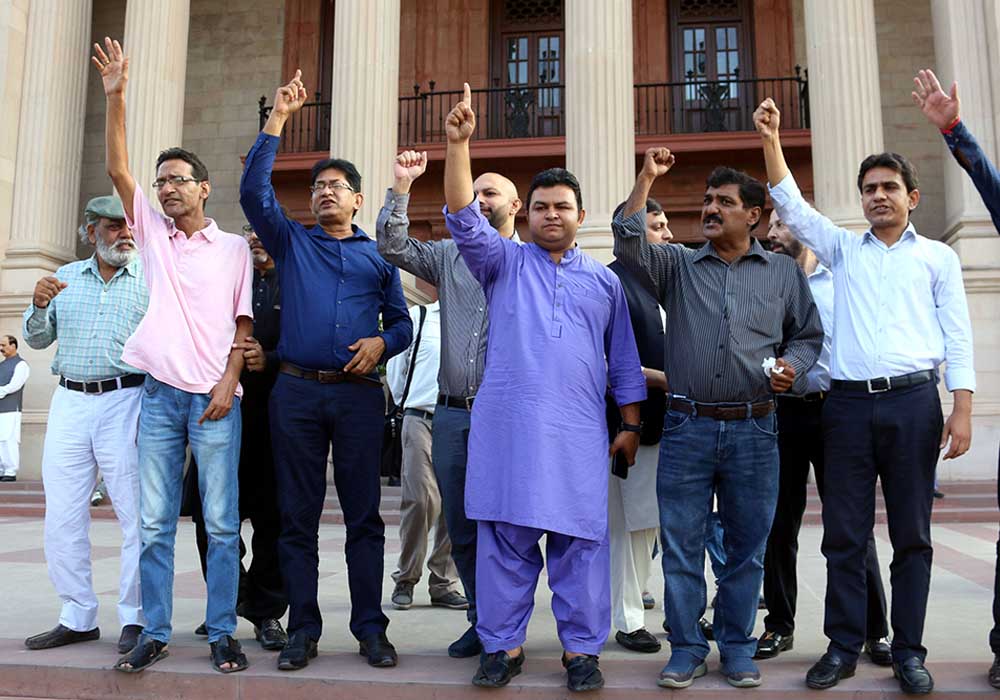 Journalists on Wednesday staged a walkout from the Punjab Assembly’s Press Gallery in protest against the attack on the family of Minute Mirror’s Chief Editor Ali Sajjad on Tuesday.

Later, they staged a demonstration at the stairs of the Punjab Assembly where they demanded the arrest of the culprits.

Speaking on the occasion, Punjab Assembly Press Gallery Secretary Hassaan Ahmed said that it was really unfortunate that the journalists had to boycott the Press Gallery for a second time in less than a month. “The journalists are being silenced in an organised way these days,” said Ahmed. He was of the view that the way the family of the chief editor was attacked is highly condemnable. “The police should investigate the matter on an urgent basis and submit a report in the house,” he added.

In his address, Pakistan Federal Union of Journalists (PFUJ) Secretary General and former Lahore Press Club president Arshad Ansari said the attack on Ali Sajjad’s family is an attack on the freedom of press. He warned of a long march if authorities fail to prevent a recurrence of such incidents.

Punjab Union of Journalists (PUJ) President Ibrahim Lucky said that it is really condemnable that the vehicle of Ali Sajjad’s family was chased by two vehicles bearing no number plates. He demanded an impartial inquiry into the incident.

Former PUJ president Qamar Bhatti said that MinuteMirror has become a symbol of independent journalism in a short span of time and the attack on its chief editor’s family is tantamount to attack on the freedom of press. He said that the Federal Investigation Agency (FIA) and other agencies should hold a thorough probe into the matter.

The home minister assured the journalists that the culprits would be arrested soon. “I’ll seek a report from the inspector general of police and stern action will be taken against those responsible for the attack,” Dogar said while speaking on the floor of the house.

After the lapse of 24 hours of attack on the family of MinuteMirror Chief Editor Ali Sajjad, Nawab Town police registered the First Information Report (FIR) against unidentified culprits on Wednesday. The police, on the complaint of Mr Ali Sajjad, registered FIR No 4202/22 under Sections 279 [Rash driving or riding on a public way] and 427 [Mischief causing damage to the amount of fifty rupees] of the Pakistan Penal Code, 1860, against unidentified criminals involved in the hit-and-run incident.

The police took a lot of time to register the FIR, citing different reasons, including an outage of power for hours at the police station. “We are sitting in darkness as there is no light for the last three to four hours,” said an official when asked about the FIR of the life-threatening incident involving the chief editor’s family.

The shocking incident of hit-and-run took place when the family members, including the children, were on their way from Ayub Chowk to EME society. Two vehicles of Toyota Hilux Revo chased the family and hit them in the midway near Al-Fatah departmental store before speedily driving away towards Thokar Niaz Baig.

The rear end of the car was completely damaged, while the family luckily remained safe. However, the children went into a shock, as they were jolted after their car was strongly hit by the speeding vehicles one after the other.

Two people who witnessed the whole scene said that there were two black-colored Toyota Hilux Revo vehicles which intentionally hit the car and speedily drove away towards Thokar Niaz Baig.

“The way they hit the car was not an accident,” said a witness, while the other witness said, “It was done deliberately and intentionally.”

A police official who was standing by the roadside in plain clothes also saw the 4×4 vehicles hitting the car and speedily running away from the spot towards Thokar Niaz Baig.

“They were black-colored double cabin vehicles which hit the car,” said the police official, adding that after the incident the vehicles escaped towards Thokar Niaz Baig. “This is an easy case. They could easily be traced,” he said.

He also stated that a Police Response Unit (PRU) force personnel chased the vehicles but they dodged the police and disappeared.